The seven-year-old had even written a letter in which he asks if he can take Kate Middleton’s ticket to the Euro final on Sunday.

A seven-year-old boy has written the Duke of Cambridge a letter in which he asks if he can take Kate Middleton’s ticket to the Euro 2020 Final on Sunday and explain why and even giving offers himself, such as “sharing his snacks” with them during the game.

The letter was posted on Facebook by the boy’s mother with the caption: “I think my 7year old might be disappointed.”

The boy addressed the letter to the “Duke and Duchess of Cambridge”, and then carefully gave reasoning for his offer. He wrote: “Hello, I was wondering as Kate cannot go to the football match can I have her ticket, please.

“I know your kind and like kids and I’m a kid.

“You have also both met my uncle Wayne and had a cup of tea with him.

“Pretty please I really want to see us win.

“P.S. Football is coming home, it really is!”

We are sure that if Prince George also attends the final alongside his father, just like he did for the match between England and Germany, will be thrilled to have another kid to share the experience with.

The post has been liked over 5,000 times after being posted on Facebook. Hey, it was worth a shot, no matter what happens. The mind of a child, truly wonderful is, with the seven-year-old having such high hopes for the ticket and the game. Oh to be young and hopeful.

William, the current president of the FA, was seen cheering on the English team at the Euro semifinals.

The Duchess of Cambridge is expected to attend the Wimbledon Tennis Men’s Final on Sunday, as she is patron of the All England Lawn Tennis and Croquet Club. Kate had been self-isolating since last week after she attended Wimbledon and came into contact with a person who turned out to be positive for the virus.

She was alerted after taking her seat in the Royal Box on Friday and left straight away at around 4 pm before Briton Dan Evans took to the court.

Since then it was confirmed that her self-isolation has ended, without any complications, and she will be returning to her royal engagements very soon.

READ NEXT: Duchess Kate Is Back For Wimbledon Women’s Final After Self-Isolating 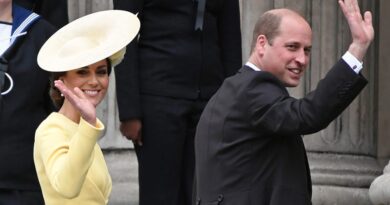