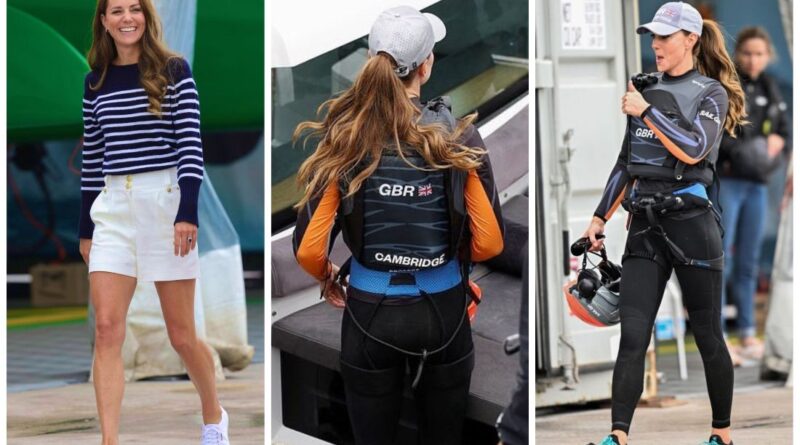 The Duchess of Cambridge was the model of a true sportsperson this Sunday when she joined the 1851 Trust and SailGP’s Great Britain team on their F50 catamaran in a special Commonwealth boat race in Plymouth.

Kate stunned onlookers as she fully embraced the nautical themes of the event, dressing in smart white shorts and a black and white striped jumper. She wore her hair in natural waves for the event, completing her look with white trainers.

The friendly, but nonetheless very much exciting competition, was held ahead of the final day of the Great Britain Sail Grand Prix.

Kate very much became a full member of the British crew, working alongside the entire team and racing at speeds of up to 50 knots, or more than 55mph. She was joined by Sir Ben Ainslie, the most successful sailor in Olympic history, who won medals at five consecutive Olympics from 1996 onwards.

“She’s a really good sailor in her own right, she has sailed with me on foiling boats as well and we’re expecting a little bit of extra help, given she’s sailed across the Atlantic,” Sir Ben Ainslie complimented the Duchess.

The New Zealand Boat Race Team on the other hand was helmed by Peter Burling and Blair Tuke, with environmentalist and UN Patron for the Ocean Lewis Pugh as its Guest racer.

The Duchess of Cambridge is a Royal Patron of the 1851 Trust, an organisation aiming to provide exciting educational experiences for 11 to 16-year-olds. Before the event, Kate joined a group of youngsters from the trust’s Protect Our Future Programme, explaining about the growing seagrass

Carnegie Bedlow, 12, from St Helier in Jersey, commented on the Duchess’ performance: “I was a little bit nervous but she did what I told her and she was very good. She asked me if I was interested in sailing. I do sailing camps in the summer, I love the ocean.”