The Duchess of Cambridge visited Cardiff on Wednesday for in Cardiff for a baby sensory class at the Ely and Careau Children’s Centre.

While there, Kate, who rarely opens up about her personal life, spoke about her experience as a first-time mother. The Duchess recalled how she and Prince William lived in Wales, where William was stationed with the Royal Air Force when George was a “tiny baby”.

“It’s nice to be back in Wales,” Kate said. “I was chatting to some of the mums. It was the first year and I’d just had George — William was still working with search and rescue — and we came up here and I had a tiny, tiny baby in the middle of Anglesey. It was so isolated, so cut off. I didn’t have any family around, and he was doing night shifts. So…if only I had had a centre like this.”

Earlier today, when the Duchess arrived at the centre in Ely, she told the hosts: “I will have to remember my Welsh!” She also mentioned her children: “We will be taking a trip down to Anglesey at some point.”

This isn’t the first time Kate has opened up about mental health and its impact on parents. In 2017, while chatting with a group of young mothers, she revealed: “It is lonely at times and you of feel quite isolated.

During her visit at the children’s centre, the Duchess played with babies, crouched down and chatted to toddlers playing “shops” with real vegetables and discussed with the parents the support they received. It was part of her mini-tour to promote her survey Five Big Questions on the Under Fives.

Kate met River Rowson, 3, who was showing her some Brussels Sprouts and Broccoli. “Are you cooking too?” she asked as he offered some vegetables. “Are you going to make a stir fry?”

Kate was also due to promote the survey in London today. Unfortunately, the visit had to be cancelled because of the weather conditions affecting her travel plans. 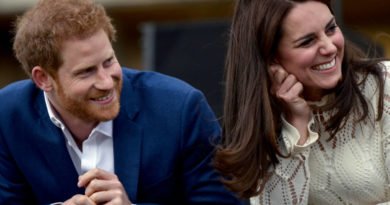