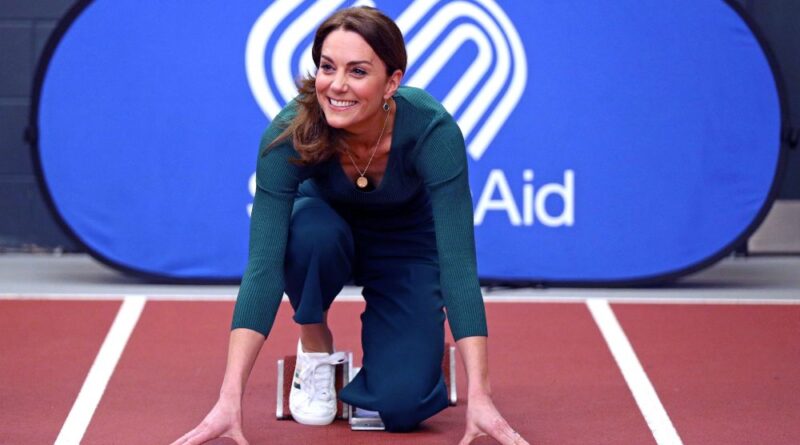 On Wednesday, Duchess Kate showed off her athletic skills, as she visited the London Stadium at the Olympic Park in Stratford. She attended an event for SportsAid, of which she is patron, celebrated the role that parents and guardians play in their children’s athletic success.

The Duchess opted for green Zara culottes for the occasion and matched it with a green top and Marks & Spencer trainers.

While there, Kate met the guardians of SportsAid athletes and heard about their challenges and the positive impact they receive from the charity. She even took to the track herself, sprinting off the starting blocks.

The Duchess was photographed laughing as she crossed the finish line with some of the youngsters including coach Coral Nourrice, Jessica Ennis-Hill, Danny Sidbury and Emmanuel Oyinbo-Coker.

She also met with Jessica Ennis-Hill, a woman she met during the London 2012 Olympics. Jessica showed her the application she submitted as a 15-year-old to receive an annual award.

Duchess Kate gave a speech in which she praised the work SportsAid does.

“It’s been fascinating to speak to so many of you here today and also to hear, just now, about some of the experiences you all have, as young athletes and as parents.

“SportsAid are a shining example of how organisations can reach out and listen to families, and provide the best support possible to enable their children to flourish.

“The crucial role that parents and caregivers play in our children’s lives cannot be underestimated.”

She added: “You may not always feel appreciated, or sometimes even noticed on the sidelines, in the car park or sitting high in the stands. But I am so proud that SportsAid recognises how key your role is and that they understand the challenges and worries you face.

“On behalf of SportsAid, I’d like to thank all the parents and guardians who have played, or are playing, their part in developing this country’s young sporting talent”.

SportsAid is a charity that helps young British sportsmen and women aspiring to be the country’s next Olympic, Paralympic, Commonwealth and World Champions. It supports over 1,000 athletes each year, the vast majority aged 12 to 18, by helping financially towards training and competition costs.

Duchess Kate, who is a keen sports fan, became a patron of SportsAid in 2013. It was only a year after her role as an ambassador for the London 2012 Olympics.

Prince William was also out and about on Wednesday. He paid a visit to at Tarmac’s National Skills and Safety Park in Nottinghamshire.