Kate Middleton and Prince William have so far been exemplary parents to their three children, with Kate especially focusing on new ways of parenting and understanding her children.

Prince William and Kate Middleton have been happily married for almost a decade, being the proud parents of three wonderful children. Prince George is the oldest, being 7, then comes Princess Charlotte, 5, and the youngest Prince Louis, 2.

We don’t often see the children alongside their parents, with the rare engagement here and there. Usually, the family spends their time either at their official residence, Kensington Palace, and their country home, Anmer Hall in Norfolk.

And when they are seen, both the fans and media witness the health and loving relationships that both parents have with their children. The Duke and Duchess of Cambridge are often seen showing affection to their children, such as holding hands or cuddling them.

Martina Mercer, a relationship and parenting expert, while talking to Express.co.uk, mentioned that even though Kate uses some forms of traditional parenting, she has also introduced new techniques.

“She makes sure her children are always spotless, very well-groomed, from their hair to their outfits.

“They’re well ironed and always in outfits that require high maintenance, through dry-cleaning or ironing, and not always the most comfortable choice for a baby, toddler or child.

“She also ensures they’re well behaved in the public eye, and you’ll often see her with one either side of her, in the trio pose or walking slightly behind.

“Already they’re learning the etiquette rules of the royal family and this shows. There’s no rolling about on the floor, sudden outbursts of singing, or fidgeting while standing in place.”

One main thing that is not often seen in the royal family due to their outdated protocols is showing affection in public, something Kate doesn’t shy away from.

“Princess Diana tried this yet was met with scorn by many members of the royal family as it was seen as rebellion or a failure to understand the importance of her position. However, Kate has had a more gentle approach, softly introducing more love, connections and affection with the children in the public eye.

“Meghan also rebelled as she wanted to change and she wanted it to be dramatic and instantaneous, whereas Kate has evolved the royal family from within, gradually, and working in harmony with stoic protocols, in order to be able to display her maternal instincts and her love for her children while still remaining completely professional and following royal family etiquette.

“In the past it may have been seen as uncouth for princesses to display so much affection to their children in public, to be seen playing with them on the grass and even scolding them when they misbehaved. However, Kate executes this with style and grace.”

Despite the royal family having some strict rules and protocols that have been followed for decades, it seems that the younger generation, starting with William and Kate, don’t hold them so highly and have no problem in stepping away from traditional ways.

“Interest and faith in the Royal Family were faltering, as they seemed so far removed from us, as civilians, and people were questioning the point of them while finding them impenetrable and unrelatable which prevented the public from feeling any real connection.

“By showing that she’s a normal mum, sharing the same emotions and problems that any mum does, Kate has built that bridge and allowed us to feel empathy with the Royal Family while also respecting their roles.”

Another interesting parenting thing both Kate and Prince William do is that they often speak with their children on eye-level. According to Martina, this removes “the threat” in a way.

She said: “It’s well known, in psychology, that children don’t respond well to people towering over them barking orders. It can cause anxiety and rarely has the impact desired from the parent.

“Children will retreat while becoming confused as they don’t fully understand the situation. By getting on a child’s eye level you remove the threat.

“You show facial expressions that reassure the child while also ensuring they can understand every word you say. It’s showing solidarity with the child while it’s also the most effective way to communicate with someone smaller and the child is much more likely to listen and absorb information this way.

“It’s also reassuring to the children in public events where there may be a lot of adults, it lets them know that their safety net (mum) is right there with them, like a reassuring hug.”

READ NEXT: How Princess Charlotte Is Showing Signs Of Supportive Royal 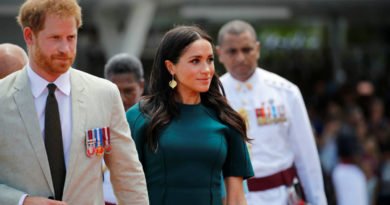