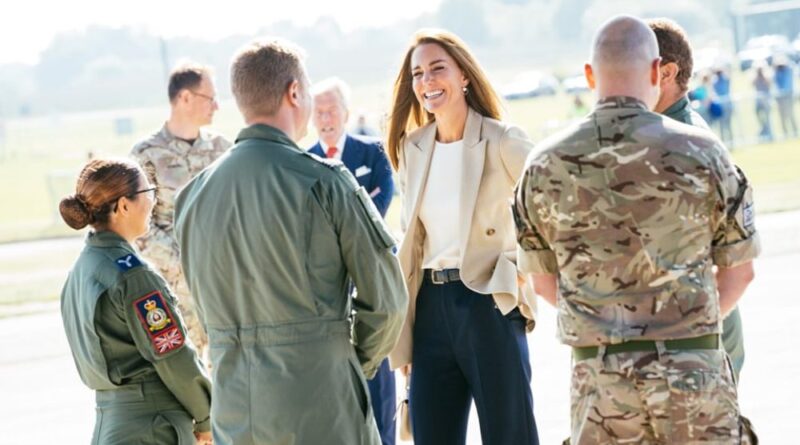 The Duchess of Cambridge has kept a low profile over the last two months as she’s been on summer holiday. But, now, she’s back with her first engagement in a while. Kate paid a moving visit to RAF Brize Norton in Oxfordshire on Wednesday, to thank some of the heroes who helped thousands of people flee Afghanistan last month.

She met some of the military personnel and civilians who took part in Operation PITTING. The operation, which was carried out between August 14 and 28, saw more than 15,000 people airlifted out of Afghanistan.

More than 850 people arrived at the RAF base in Oxfordshire and were provided practical support like food, clothing, children’s toys, medical help and childcare and sanitary products whilst their details were processed.

Kate arrived at the base, which is about 80 miles north west of London, by helicopter before being driven to the hangar where the volunteers and service personnel were gathered.

For her return to the public eye, she opted for a cream-colored blazer by Reiss, a white crew-neck sweater, and wide-leg navy trousers. She accessorized with a prim beige mini Tusting bag and silver earrings.

Kate wrote on the couple’s official Twitter account: “Thank you to all the incredible people involved in #OperationPitting, the largest humanitarian aid operation for over 70 years, which saw 15,000 people flown out of Kabul in August by the @RoyalAirForce”.

Kate’s visit also comes after her husband Prince William ‘personally intervened’ to get the family of an Afghan officer he knew from Sandhurst out of Kabul amid chaos at the airport.

Wednesday marked Kate’s first official royal outing since July 11, when she visited the final of the European soccer championships with Prince William and Prince George.

At the weekend, she, William, George, Charlotte and Louis traveled to France to celebrate her brother James Middleton’s wedding to financial analyst Alizée Thevenet.

READ NEXT: Duchess Kate Spotted Shopping For School With George And Charlotte