The Cambridge trio have a new favorite animal, one which their grandfather, Prince Charles, will certainly approve of.

Almost each and every member of the royal family is a big fan of the outdoors and has their favorite animal. For example, the Queen herself is particularly fond of horses. She has been riding for most of her life, including most days in quarantine. Princess Anne and her daughter Zara Tindall both became professional equestrians.

However, there is another animal that has been stealing the hearts of royal family members. And it seems that the number of fans it has is growing.

According to reports from The Sun, Prince William and Kate are helping their three children raise chickens; a bird that Prince Charles truly loves.

“Charles is the all-time chicken lover, and has an encyclopaedic knowledge of most breeds and knows how to rear them,” a source told the newspaper, adding that he and Duchess Camilla like to talk to their hens.

“‘Cluckingham Palace’ is what his house is sometimes called.”

Kate and her children, Prince George, Princess Charlotte and Prince Louis have been watching their hens grow up at Anmer Hall, the Cambridge country house, located in Norfolk, where the family of five has been quarantining since March. “The great interest outside Anmer Hall are the hens, reared from chicks,” the source said.

“Kate and the children are out daily in the hen house, collecting fresh eggs in their baskets, and the eggs are then used in the kitchen almost immediately. [They] have a well laid out chicken coop, and a safe fox-proof chicken house, filled with healthy food and feeding treats. Organic self-sufficiency is the name of the game with the Cambridges.”

Reports also say that the family has also set up a vegetable garden at Anmer Hall. Each of the kids has their own plot of land to take care of, though Prince Louis is still too young to take care of his himself.

Kate has long talked about her belief that gardens can be helpful for teaching young children. And, in 2019, she designed and worked on a display for the Chelsea Flower Show that put her ideas in practice. She has also talked about how her children love helping her out in the kitchen.

Kate has always been a hands-on mother, not being afraid to let her children find things out for themselves. In her most recent interview, for the BBC on Tuesday, Kate mentioned how her children have been very hungry during the quarantine. “My children have bottomless pits,” she said. “I feel like a constant feeding machine.”

READ NEXT: Why Duchess Kate Says George, Charlotte And Louis Are ‘Bottomless Pit’ 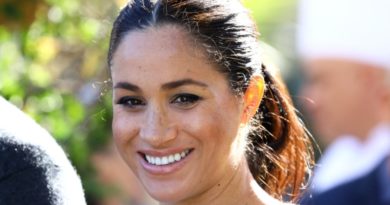 Why George, Charlotte And Louis Could Miss Christmas With The Queen

Kate Has The Sweetest Nickname For Daughter Charlotte