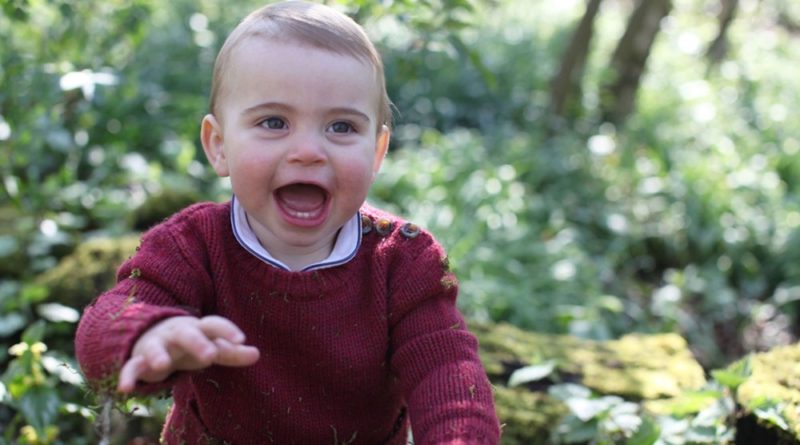 In honor of the royal youngster’s first birthday on Tuesday, Prince William and Kate unveiled a new set of official portraits.

Keeping with tradition, Kate got behind the camera to take the sweet photos earlier this month at the family’s home in Norfolk, Anmer Hall.

The Palace also released this statement, which read: “The Duke and Duchess of Cambridge are delighted to share three new photographs of Prince Louis ahead of his first birthday tomorrow. The photographs were taken earlier this month by The Duchess at their home in Norfolk.” In two of the photos, Louis is wearing a dark red round-neck jumper with a collared shirt underneath. The one-year-old Prince is all smiles as he enjoys playing in the garden. His broad smiles show off his two bottom front teeth and it looks like two more teeth may be on their way soon.

In the third photo Louis looks adorable in a blue jumper with with a dog stitched on the front.

The last time we saw Prince Louis was in the Cambridges Christmas portrait. And since then he has grown to resemble his brother Prince George and dad William.

The youngest royal is fifth in line to the throne behind his sister Princess Charlotte and Prince George. Louis is the sixth great-grandchild of the Queen and Prince Philip. Time flies really fast! It seems like it was yesterday when Kate and William showed off their third son to the world on the steps of the Lindo Wing of St Mary’s Hospital in Paddington. And now Prince Louis is turning one!

In March, Kate revealed that Louis, then about 11 months old, was an active child who enjoyed “bombing around” on a walker.

“He just wants to pull himself up all the time. He’s got these little walkers and is bombing around on them,” she told a fellow parent.

A royal source also said: “He is the most delightful boy, always happy and smiling. He is adored by all the family, especially his big brother and sister.”

READ NEXT: The Rules The Queen Insists Kate Must Follow As William Prepares To Be King

How Duchesses Kate And Meghan Are Becoming More Of A-Team

The Duchess Of Sussex Declined Her Emmy Award Invitation