They might be the Duke and Duchess of Sussex, but that doesn’t mean that they don’t act like the rest of us mere mortals. The down-to-earth couple often travels together, and during their trip to Nice in the South of France, just a few months before their wedding, they surprised onlookers by deciding to fly economy on the plane. The couple had taken a scheduled British Airways flight in December for their New Year’s getaway. According to the Daily Mail, the couple was seated close to the toilets, with Prince Harry wearing a baseball cap and Meghan sitting in the middle seat.

It has been quite the year for Harry and Meghan, who finally said their vows in front of the royal family, close friends and a million more people. And just like every young couple ever, talks of starting a family began as soon as they tied the knot. At the end of July, Harry put his car for sale, which might mean that he was hoping to swap his Audi RS6 Avant-which he only bought a year something more family friendly.

READ NEXT: Meghan Markle’s New Life: Dealing With The Rules, The Spotlight And An Dad

And when they finally start a family, unlike most male siblings in the UK, their children will not have the same surname. While Prince William and the Duchess of Cambridge’s children – Prince George, Princess Charlotte, and Prince Louis – all have the last name ‘Cambridge’, Harry and Meghan’s little ones will use the surname ‘Sussex’ after their father’s official title, the Duke of Sussex.

Harry and Meghan were last seen in public on Saturday at the wedding of Harry’s childhood friend in Surrey. The couple attended the ceremony of Charlie van Straubezee and filmmaker Daisy Jenks. The ceremony took place on the same day as Meghan’s birthday. Other royals that were at the wedding were Princess Eugenie-who is also set to get married in October to her long-term boyfriend Jack Brooksbank.

READ NEXT: Meghan Has Received Her First Royal Birthday Gift 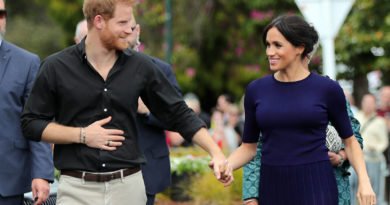