The Cambridges and the Sussexes have confirmed they will separate in a huge area of their lives – their charity, the Royal Foundation.

Prince William and Kate will continue to head the charitable organisation, renamed the Royal Foundation of the Duke and Duchess of Cambridge. Prince Harry and Meghan will set up their own Foundation to support their own causes.

According to the organization the decision was made following the conclusion of a review into its structure. The couples will continue to work together in the future. The decision was taken to “better align” their charitable activities, they added.

“In addition both couples will continue to work together on projects in the future, including on The Foundation’s mental health program, Heads Together.”

The brothers set up the Royal Foundation in 2009. Kate joined two years later after marrying William , and she has been a key part of its work since.

Meghan joined the trio on stage for the first time before their wedding for what was due to be an annual meeting.

This change comes after Meghan and Harry split from the Kensington Palace household, setting up their own office within Buckingham Palace. William and Kate have kept their office at Kensington Palace.

This split was expected to happen. It comes after William and Harry held a Royal Foundation trustees’ meeting at Kensington Palace on Wednesday.

It has also already been reflected in the royals’ correspondence.

The thank you cards that William and Kate send for Louis’s first birthday was addressed from “The Office of TRH The Duke and Duchess of Cambridge.”

READ NEXT: Why Did Kate, The Queen And The Other Ladies All Wore Blue At Royal Ascot 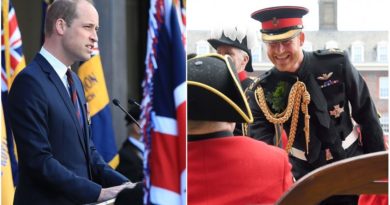