During his visit to the Empire Fighting Chance Charity in Bristol, Prince Harry asked everyone to leave the room so he could speak in private with a teenager, who got a bit emotional when speaking about losing his parents. The Prince talked for ten minutes with 15-year-old Iestyn Jones, sharing their mutual misfortune.

“The same thing happened to me”-the Prince said. “It just got a bit emotional because he mentioned something. He knew some stuff about me and the same thing happened to me. We had a chat for about ten minutes. When we had a group picture at the end he made sure I was standing next to him. They were lovely people. I didn’t expect them to be like that. They were amazing people.”

Martin Bishop, the co-founder of the charity, also revealed: “There was a moment where he and a young person shared an experience. They sat down and asked us to leave the room and talked candidly.”

Harry, who also lost a parent, his mother Diana in 1997, made a day trip to Bristol with his wife Meghan Markle. This was the last engagement of the day, as the couple visited the youth charity, which combines non-contact boxing with education, mentoring and therapy. The goal of the organization is to support children aged eight to 21 who are failing at school and in danger of drifting into a life of unemployment or even crime, and help them turn their lives around.

During their visit, Harry and Meghan met with some of the young people who are members of the boxing club. Why do you like punching the bag so much? Calms you down? What would you be doing if you were not here or at school?” Harry asked. The boys said they would be playing video games, such as Fortnite. “Why would you want to play Fortnite when you can come here?” the Prince asked. Great advice.

The Royals were given a tour by Mr Bisp and fellow co-founder Jamie Sanigar. “You have got to think outside the box because there is a lack of services and the services that do exist are not suitable,” said Harry. “One of the things that everyone knows that works are a sport, and especially boxing. In the last ten years, the popularity of boxing has gone through the roof but more and more these facilities have been shut down.”

The Duke told Mr Bisp and Mr Sanigar that many people would not want to “sit in a chair” and talk about their mental health, but would participate in sport. “You don’t even realise you are being cured but you are. You guys understand this,” Harry said. 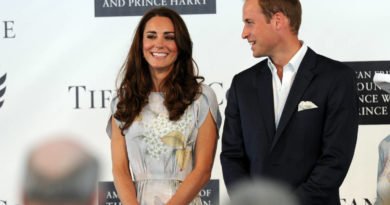