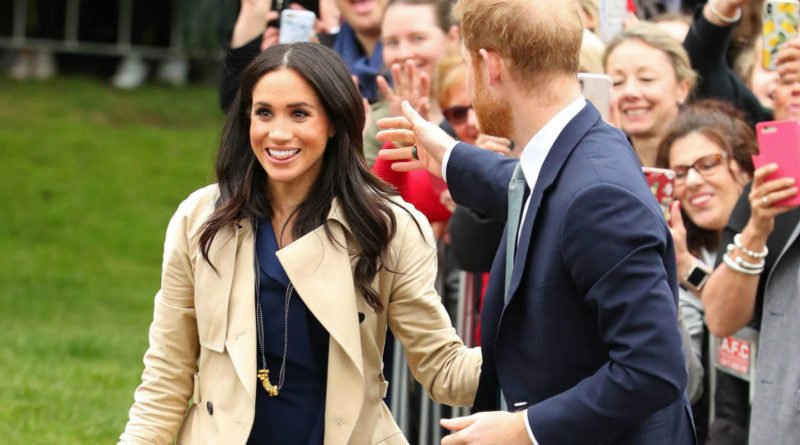 We all know that Prince Harry and Meghan Markle aren’t exactly the type to follow royal protocol, so it is not unusual for the couple to be sharing cute moments and showing their love in public. And that’s what they have been doing while on tour also. The last two weeks, the Duke and Duchess of Sussex have been visiting tons of places in Australia, New Zealand, Tonga, and Fiji, as they are on their very first overseas royal tour as a married couple. And the 16-day tour is coming to an end. During their time in Melbourne, the couple showed the cutest display of affection between them and most fans didn’t notice it until now. They had been holding hands for most of the trip, but this time, it seems that it wasn’t enough for Harry to hold Meghan’s hand with one hand. The Prince reached out behind his back with his hand to grab his other hand, which was holding hers. The move was accompanied with thumb-stroking, much like how it was on their wedding day. The fans have started calling the move a ‘super PDA’ and we say-the name sure does fit.

Fans also suggested that a new style of hand-holding is ‘born’ although we cant says for certain. What we can say is that is one of the cutest things that Prince Harry has done. So cute.

A new hand-holding style is born. I call it super PDA – I know you’re here, I love you. I’m into you baby. ? ? When your man loves to touch your hand with full skin-to-skin contact, it simply means he loves you a lot and can’t do without you. Lol ? Harry, please keep showing the world how a man should properly treat and love his woman. Can’t get enough of these two. .. .. . Tag your friends to see this. .. . . .. … .. ⛔ Commenters of rude comments, offensive and hateful speech will be permanently BLOCKED…⛔ .. .. … … .. .. … .. … … .. .. … .. .. #royaltour #princeharry #meghanmarkle #duchessofsussex #dukeofsussex #britishroyal #uk #Sydney #duchessofcambridge #england #royal #kateMiddleton #fashion #truelove #Dubbo #london #Australia #PrinceWilliam #travel #SerenaWilliam #britishroyal #beauty #fashion #britishroyalfamily #losangeles #couplegoals #tonga #fiji #melbourne #RoyalVisitAustralia #Dubbo #RoyalTourAustralia #Royalbaby

READ NEXT: The Sweet Story Behind Meghan’s Green Necklace She Received In New Zealand

Why Both Meghan And Kate Wore Muted Colors For Their Outings With The Queen?