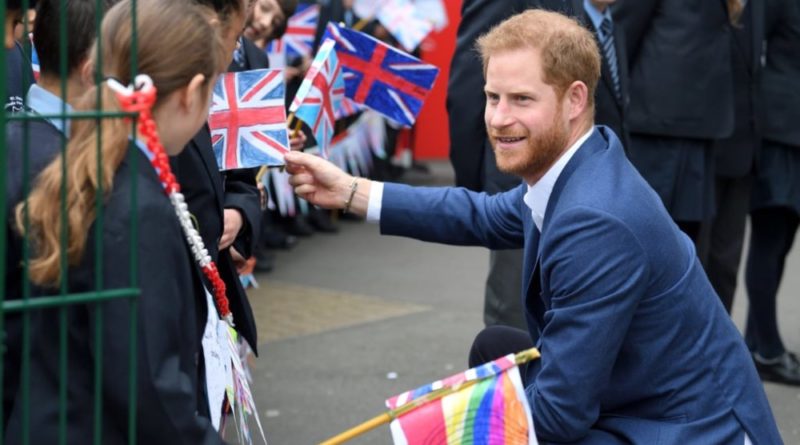 The Duchess of Sussex is just few weeks away from the due date for her and Prince Harry’s first baby. And today, dad-to-be Harry may have dropped a hint that she is now on maternity leave!

On Wednesday, the royal visited St. Vincent’s Catholic Primary School in Acton, where he helped the children to plant trees in the garden. As he chatted with the pupils, one of them asked him where Meghan was. And Harry answered miming the shape of the baby bump of his wife Meghan referring to her pregnancy.

He also told them she was having a baby, suggesting that she’s now officially on maternity leave.

One of the excited students was not sure Harry was a real prince. Teaching assistant Philomena Frattura revealed: “One of them tapped him and said, ‘When is Prince Harry coming?’

“The student then said, ‘When is the real Prince Harry coming?’

“Harry replied, ‘I’m the real Harry. I’ve just had my hair cut for the occasion.’ ” During his visit, Harry also met Winnie, the headmaster of the school’s dog, who he calmed by placing his finger to his lips.

For the occasion, the Duke of Sussex sported dark blue slacks, a button-up and a light-blue jacket.

Harry’s visit to the school comes a day after he and Meghan made a surprise joint appearance at New Zealand House in London. Although Meghan’s maternity leave isn’t yet officially confirmed by the Palace, she wasn’t expected to make any other public outings.

Dressed all in black and walking hand-in-hand, the couple had arrived to sign a book of condolences for the victims of Friday’s terrorist attack in Christchurch, where almost 50 people lost their lives and a dozen more were injured after a gunman opened fire on two mosques.

Meghan wrote: “Our deepest condolences. We are with you.” Harry signed his name with “Arohanui,” which is Maori for “best wishes.”

READ NEXT: Harry And Meghan Just Made A Surprise Visit To New Zealand House In London