The Prince will visit Japan for the game on Saturday. While he’s there he will most likely meet up with some of his family members who are already out in Tokyo. Mike Tindall has been there for the past few weeks for his work with House of Rugby, and over the weekend he was joined by his wife Zara Tindall.

Mike shared a photo with his social media followers which shows the former rugby player holding the camera with one hand and his free arm wrapped around his wife. Peter Phillips, has also joined his sister and brother-in-law in Japan, according to another picture shared by Mike.

Prince Harry is really close to Mike and Zara, as well as his older cousin Peter. He is one of their second daughter Lena Tindall’s godparents. Mike Tindall also revealed earlier that all the cousins have a WhatsApp group to keep in touch. “Me, my brother and then a few of Zara’s side like her brother Pete and the cousins are on WhatsApp groups,” he told the Mirror.

“I wouldn’t say we’re cutting edge, but it’s just easier for some reason on WhatsApp. I’m in about 25,000 groups.” He continued: “You might do it for a get-together and just stay on the group, and occasionally people will post. You’re scared to leave because you don’t want to be seen to be rude!”

Ahead of his upcoming trip, Harry congratulated England for their semi-final victory over New Zealand at the weekend.

He posted two photos on his @sussexroyal Instagram page and wrote: “Today the England rugby team beat the New Zealand All Blacks to reach the final of the Rugby World Cup 2019 in Japan. HRH The Duke of Sussex is a patron of the Rugby Football Union @englandrugby and like most rugby fans this morning was thrilled to be able to witness such an amazing display of sportsmanship between two great teams.”

Harry’s personal message was written underneath, reading: “Wow, what a game of rugby! Another fantastic performance from our boys, well-done lads! You are making us all incredibly proud back home – bring on next week! – The Duke of Sussex.” 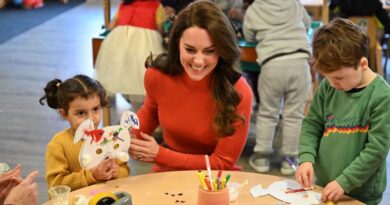