Prince George, Princess Charlotte and Prince Louis might be the youngest members of the royal family, but the trio has already become fan favourites with tons of fans watching their every step.

Their charming personalities and sweet smiles are the main reason why Prince William and Kate Middleton’s children are so popular with the masses. And both William and Kate have been doing a great job at the parenting thing, which certainly adds to the appeal.

Prince William and Prince George have a special connection. This was most apparent back in September 2016 at a children’s party for military families, during their tour of Canada, when Prince George just couldn’t get enough cuddles from his father.

The first of the Cambridge children, and third in line to the British throne, Prince George, showed off his baby blues in their 2014 Christmas photographs, with his guardsmen tank top being a highlight.

All three children have to work the same christening gown, with Prince George not being too sure about the lacy choice for his baptism ceremony back on October 23, 2013, at St. James’s Palace’s Chapel Royal.

Kate and William continued the royal tradition of ‘unveiling’ their child to the world at the steps of St Mary’s Hospital, as they have done with all three of their children. Princess Diana also has photographs with both Prince William and Prince Harry on the steps of the hospital’s Lindo Wing.

READ NEXT: All Of The Four Nicknames That Prince George Has

And then came Princess Charlotte. Kate and William’s second child confused fans when she was the spitting image of her older brother in the portraits taken at the family’s home of Anmer Hall, Norfolk in May 2015.

How fast they grow up. Prince George quickly grew up and we got to see him on his first day at school on September 7, 2017, all dressed up in a cute shorts-and-socks combo. The young prince was a bit nervous, but luckily dad William was there to offer some helpful advice. Later on, Princess Charlotte also joined her brother at his school, Thomas’s Battersea, which costs around £18,000-a-year.

One of the most iconic photographs that Prince George has is when he met the president of the United States. Prince George got to meet Barack Obama, in his dressing-gown nonetheless, with him looking as comfortable as ever while he greets the US president at Kensington Palace in April 2016. That was a great night for George, as he got to stay past his bedtime so that he could show the president his rocking horse.

Prince George might not be as relaxed as his sister Charlotte in front of the camera, but he too has his moments. While Charlotte doesn’t shy away from giving the fans a small wave, George has a kind of shy cuteness to him, especially with a gap-toothed smile, from a photograph taken for his seventh birthday. He looks eerily similar to his dad in that photograph.

While on his very first royal tour to Canada alongside his parents in 2016, Prince George has been described as a shy and serious little man, quiet and inquisitive in nature.

For Christmas 2019, the Cambridges delivered another iconic family shot, with Prince William looking very proud of his three children, and why shouldn’t he be?

Princess Charlotte is possibly the most theatrical of the trio. The world first got to see her on May 2, 2015, at the steps of the Lindo Wing of St Mary’s Hospital London of course. The two proud parents were glowing with their first daughter, the fourth-in-line to the throne.

Mom Kate is often the one behind the camera in these stunning photographs, such as this one, taken just before Charlotte’s first birthday at Anmer Hall. For Charlotte, posing for the camera comes naturally, with no stress and totally relaxed. But Kate speciality is capturing her kids in ways that only a mother could, be it during play or just hanging out.

For Christmas 2016, mother Kate and daughter Charlotte tried to match, with Charlotte’s red tights, dress and hair bow being the same colour as her mother’s purse, in a photograph captured at St Mark’s Church, Berkshire.

Charlotte is often bombarded with gifts, but one that stands out due to its cute factor is the min bouquet the Princess got during their visit to Poland and Germany in July 2017, at Berlin Airport.

Princess Charlotte’s easy-going and positive attitude, akin to her uncle Harry, pared with her very lively performances during royal engagements, its no surprise that she got the nickname Warrior Princess at Willcocks nursery. And when you see the photos from the 2019 King’s Cup Sailing Regatta at Cowes, Isle of Wight, you understand why.

Last September, Princess Charlotte joined her brother as his school, Thomas’s Battersea, with the day being filled with emotion.

During the lockdown, the trio still managed to cheer everyone up by showing their support for the NHS on March 26.

She is quite the hard-working royal, even at this age, often helping with getting food packets to pensioners this July, as well as welcoming guests at Kensington Palace with tea, coffee or sweets.

Prince Louis is the youngest of the Cambridge children, being introduced to the world on April 23, 2018. He is quite the lucky royal, as he has both an older sister and brother to look after him. And this is exactly what Charlotte is doing in this photograph.

During his christening at Chapel Royal at St James’s Palace in July 2018, big sister Charlotte was heard telling the paparazzi “you’re not invited!”. According to reports, Charlotte wouldn’t leave her brother’s side for weeks after he was born.

Another great picture from Kate, taken before Louis’ first birthday while the family were staying in Norfolk in April 2019.

His parents describe him as a big fan of nature, wanting to be in the garden all the time. We are pretty sure that he was jealous of his father for getting to ride the horses at a charity polo day in Berkshire in July 2019.

At his very first Trooping the Colour, Prince Louis looked quite unimpressed.

With the current global pandemic still raging around the world, Kate has talked how the new ‘normal’ has affected her children, especially Louis, who just wants to “cuddle everything”-especially other babies.

This wonderful family photo was taken for Children In Need and Comic Relief in April 2020. Great idea going with coordinated outfits.

Prince Louis often looks happy and playful. In a gingham shirt similar to his big brother George’s, this gorge snap was taken at the family home in Norfolk in April this year, ahead of his second birthday.

Prince George And Princess Charlotte Back To School After Family Holiday 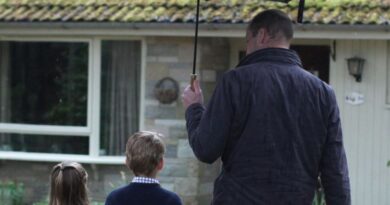