One way or another, Meghan Markle and Prince Harry are continuing the legacy of Princess Diana. On Friday, the couple shared an inspiring quote from Harry’s late mother, Princess Diana on their official Instagram account.

“Carry out a random act of kindness, with no expectation of reward, safe in the knowledge that one day someone might do the same for you,” the quote read on a blue background that features Meghan and Harry’s joint monogram.

In a caption, they wrote: “Words have the power to inspire, which is why we’re happy to share some of our favourite quotes.

“From members of the public to public figures, from teachers and students to young leaders, we begin with a quote from Diana, Princess of Wales.”

This inspiring post marks the very first time that the couple has mentioned Princess Diana on Instagram. However, they did have a subtle nod to Harry’s mother in other posts, such as with the photo posted of baby Archie on Mother’s Day surrounded by Diana’s favourite flower, forget-me-nots.

Words have the power to inspire, which is why we’re happy to share some of our favourite quotes. From members of the public to public figures, from teachers and students to young leaders, we begin with a quote from Diana, Princess of Wales.

Prince Harry had a very close bond with his late mother, as well as her family, a bond that continues to this day. Diana’s sisters, Lady Sarah McCorquodale, 64, and Lady Jane Fellowes, 62, were also part of the family portrait taken at Windsor Castle when Harry and Meghan celebrated the christening of their son, Archie Harrison last month.

“Harry is close to Diana’s family,” a royal source explains. “It meant a lot to them to share a photo of their full family.”

A family friend says the inclusion of the Spencers “is typical of both William and Harry to say in a very, very gentle way, ‘This is the family of our mother, and we want to reflect that.’ She is always in their hearts, but this is a public way of saying that she is still on their minds.”

Diana’s both sons have done everything to keep her memory alive, since her untimely death in 1997, with Prince William, her eldest child, naming his 4-year-old daughter Charlotte Elizabeth Diana.

Meanwhile, Harry and Meghan have talked about their plan to make sure Diana’s legacy lives on when they sat down for an interview after their engagement in 2017, with Harry proudly saying that his mother would love his now-wife.

“They’d be thick as thieves, without question,” he said. “I think she would be over the moon, jumping up and down, so excited for me. But I think she would have been best friends with Meghan.”

To keep his mother “with us on this crazy journey together”, as Prince Harry said, he proposed with a ring that includes two diamonds from Diana’s personal collection, as well as a stone from Botswana, where the two travelled earlier in their relationship.(which is also the place where Prince William proposed to Kate Middleton with Diana’s engagement ring back in 2010)

Meghan noted that keeping Diana close to their hearts during their engagement was important to her too.

“Not being able to meet his mom, it’s so important to me to know that she’s a part of this with us,” she said.

READ NEXT: The Real Reason Why Princess Charlotte Stuck Her Tongue Out Revealed 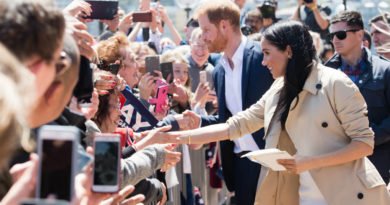