Both elder children of Kate Middleton and Prince William, George and Charlotte were present at the King’s Cup regatta, cheering on their parents as they went head-to-head in the King’s Cup boat race.

And they even managed to steal the show from their parents with their naughty antics, but only Princess Charlotte was caught on camera.

Princess Charlotte was caught poking her tongue out at onlookers at the charity regatta, prompting an adorable reaction from her mother. But the more interesting moment that the cameras missed was with Prince George, with the young royal apparently eating an ant. An acquired taste, for sure.

This controversial moment was shared by royal expert and correspondent Victoria Murphy, who saw the young prince tucking into the insect while mum Kate wasn’t looking.

“The Cambridge children had a great day out today,” she tweeted.

“Cheeky Charlotte stuck out her tongue at the crowds while George apparently ate an ant!

“They also joined in with activities on the seafront earlier in the day.”

The Duke and Duchess had a blast competing against each other in the regatta, with Kate’s team finishing last in the end after being disqualified in the second of the two races. Bear Grylls beat the Duke and Duchess of Cambridge in both races and his team took the gold.

The royals acted as skippers on their own boats, with six other teams also competing in the race. In the first race, William finished third, while Kate came in seventh. In the second one, William came in fifth, while poor Kate was disqualified due to her team starting early.

They were battling it out for The King’s Cup trophy, a historical cup first presented by King George V at Cowes’ Royal Yacht Squadron in 1920.

Earlier, the couple visited children’s attractions in Cowes along with 16-month-old Prince Louis.

READ NEXT: The Real Reason Why Princess Charlotte Stuck Her Tongue Out Revealed 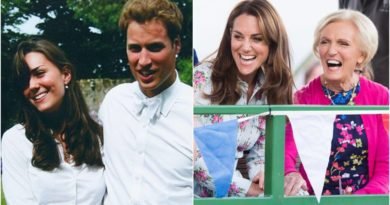