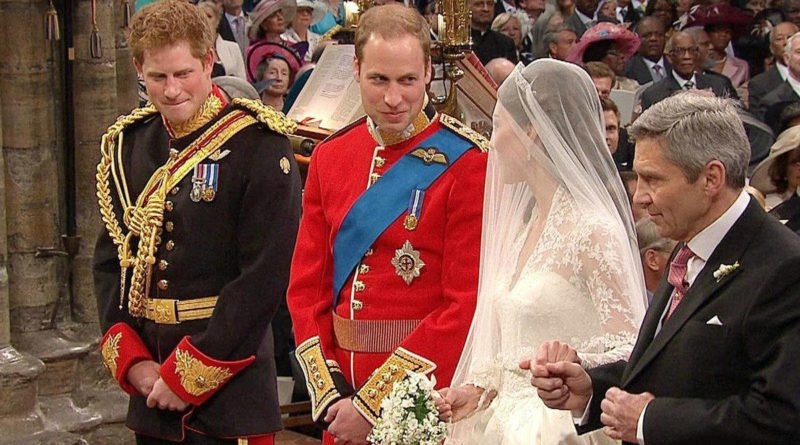 The biggest event in 2011 was no doubt Prince William and Kate Middleton’s wedding ceremony. The event was watched by over 2 billion people worldwide, with 300 guests in attendance. But it was soon overtaken by the much bigger and more anticipated wedding of Prince Harry and Meghan Markle, who is now making a family of their own with their first child on the way. Both brothers were each other’s best man, with Prince Harry even making a surprise for the Duke and Duchess of Cambridge after they shared their memorable Buckingham Palace Balcony kiss.

Royal author Katie Nicholl shares some details about Prince Harry’s best man speech at the Duke and Duchess of Cambridge’s wedding reception, which was given at Buckingham Palace after a three-course meal. All the details are in her 2017 biography “Harry: Life, Loss and Love”.

Ms Nicholl writes: “It was affectionate, warm and funny and touched William deeply.” Prince William wasn’t the only one that was touched by the speech, as also Chelsy Davy, Harrys then current girlfriend, was touched, and he even managed to make the bride cry.

She continues: “When he said the couple’s decade-long romance was his inspiration, there was a shy smile from Chelsy, while Kate shed a tear.”

Ms Nicholl also reveals some of the cheekier moments from Harry’s humorous speech.

She writes: “The speech was peppered with Harry’s classic sense of humour, and he ribbed his brother: ‘William didn’t have a romantic bone in his body before he met Kate, so I knew it was serious when William suddenly started cooing down the phone at Kate.’ “Famous for his mimicry, Harry then impersonated his brother calling Kate ‘Babykins’, to much laughter from the guests.”

However, she also reveals that Chelsy Davy made him delete one line in particular.

Ms Nicholl writes: “She had helped Harry edit the best man’s speech, sensitively advising him to take out a line about Kate’s ‘killer legs’ that might have embarrassed the bride.”

Besides the speech, Prince Harry also helped Kate’s sister Pippa Middleton in “transforming the Throne Room at Buckingham Palace into a nightclub”, where he organised disco balls and “giant glass bowls of Kate and William’s favourite Haribo sweets”. Prince Harry sure knows how to party.

Ms Nicholl writes: “Harry happily took on the role of master of ceremonies and made sure everyone was having a great time.” After the wedding, Ms Nicholl tells us that Harry’s girlfriend at the time, Chelsy Davy, was the moment when she decided that the royal life was not for her. Their relationship lasted for seven years, with lots of on-off moments.

Ms Nicholl wrote: “Being part of the royal wedding had made Chelsy’s mind up once and for all.

“The life of a royal bride was not for her and she told Harry she could never make the sacrifices Kate had made.”

One of Chelsy’s friends told Ms Nicholl: “It was just after the royal wedding when she realised she couldn’t cut it.

“She saw what it would be like in the spotlight, and she didn’t want that life for herself. “She truly loved Harry, but knew this wasn’t a life she could lead.”

Despite this, Ms Nicholl claims that Chelsy and Kate “stuck together like glue” but had “very different personalities”.

Harry and Chelsy “remained on good terms”, though. They remained such good friends, that Chelsy even was in attendance at his wedding to Meghan Markle at St George’s Chapel, Windsor.

READ NEXT: Kate Revealed What Son George Thinks Of Her Soccer Skills During Trip To Belfast