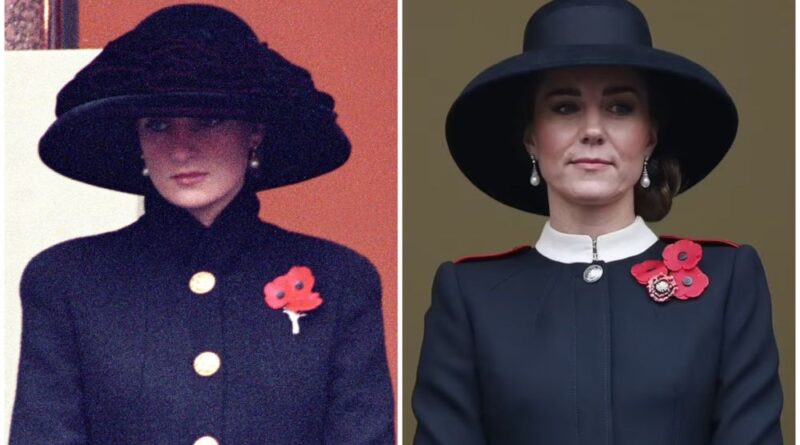 Sunday was Remembrance Day, appearing on the balcony above the Cenotaph was the Duke of Kent and Princess Alexandra taking the place of Her Majesty Queen Elizabeth who unfortunately made the last-minute decision to not appear at the ceremony as she has sprained her back, according to the palace.

In his uniform as Squadron Leader of the RAF, Prince William stepped forward to lay a wreath, following his father Prince Charles, who laid wreaths on behalf of himself and the Queen.

On the neighbouring balcony to the Duke of Kent stood the Duchess of Cambridge, flanked by the Duchess of Cornwall and the Countess of Wessex and, as many of us noticed, she appeared to be channelling those who could not there.

Namely, Catherine, Duchess of Cambridge appeared at Remembrance Day wearing a wide-brimmed hat, a shape entirely not characteristic to the Duchess, topping her black ensemble. This look instantly drew comparisons to an outfit worn by her late mother-in-law Princess Diana at the same event back in 1992.

Even excluding the very comparable headpiece and collared jacket, the drop pearl earrings and poppy pin featuring three red flowers that Kate wore were just like the ones worn by Diana.

Elizabeth Holmes, author of HRH: So Many Thoughts on Royal Style also speculates that Kate was also paying tribute to Queen Elizabeth, whose iconic wide-brimmed hats are a staple of her wardrobe as much as her perfectly coordinated colourful outfits are.

The Duchess has experimented with head toppers ever since her debut at the ceremony in 2011, having worn fascinators, nettings and ever-larger styles in both 2016 and 2017.

However, she did not have to look far for the rest of her outfit choice, just inside her closet. Having been known for recycling her best outfits (as would we, why fix what definitely isn’t broken), the Duchess of Cambridge wore the same military-inspired jacket with a white collar and red detailing on the shoulders by Alexander McQueen as she did in 2018 when she opted for a black fascinator and pearl earrings.

The poppy pins are, of course, a staple of Remembrance Day, having been used since 1921 to commemorate all those who have lost their lives in war. It’s believed to have come from the poem “In Flanders Fields” by John McCrae, written about the Great War, the opening stanza reads:

In Flanders Fields, the poppies blow

Between the crosses, row on row,

That mark our place; and in the sky

Scarce heard amid the guns below.

A tradition adopted across the UK and Commonwealth, it is especially apparent on Armistice Day, November 11, to commemorate the sacrifice of those in the Armed Forces.

READ NEXT: Piers Morgan Fears Palace Not Telling Fans Everything About Queen’s Health

How Meghan Sent A Message To Mom Doria In Erdem Coat Dress?