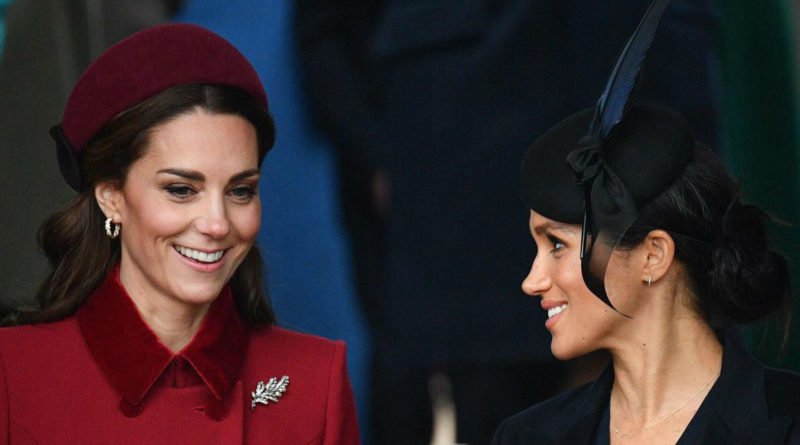 In the last couple of weeks, there has been tons of speculation about a supposed royal rift between the two Duchesses, Kate Middleton and Meghan Markle. And it certainly didn’t help that Prince Harry and Meghan Markle suddenly decided to separate their royal household from the Duke and Duchess of Cambridge.

They will be moving to Frogmore Cottage in Windsor, while Prince William and Kate Middleton, along with their three children Prince George, Princess Charlotte and Prince  Louis will be remaining at Kensington Palace. But it seems that even if there was a problem between Kate and Meghan, it has been fixed as they set aside their differences and had a wonderful royal Christmas at Sandringham together.

During their podcast ‘Royally Obsessed’, writers Kaitlin Menza and Lisa Ryan talked about the royal Christmas photographs from their holiday festivities.

They say that the Duchesses projected a strong image of a family as they were photographed while making their way to church for the traditional Christmas Day service.

They say: “It was no accident that they positioned the two women in the middle together, Kate and Meghan were sided by side.”

They described how the images showed: “Everything’s great, they’re just two sisters-in-law, having a great time”.

They discussed how the Duchess of Cambridge and the Duchess of Sussex were “looking like they actually like each other.” It’s great that the Duchesses are getting along, and none are happier about this than Prince William and Prince Harry, who were said to have looked happy while being accompanied by their wives.

Both Kate Middleton and Meghan Markle looked stunning during the festivities and were praised for “dressing beautifully and looking great”, as always.

“Meghan’s outfit was one I’d try to recreate in my own life,” said host Lisa Ryan.

Meghan went for a “head to toe navy, head to toe Victoria Beckham” look for the church service.

The two royal commentators were also a bit disappointed that they didn’t get the chance to see  Prince William and Kate’s children, Prince George, Princess Charlotte and Prince Louis, at the Christmas Day service, as the Cambridge children are still too young to take on the official royal duty.

READ NEXT: Duchess Meghan Could Buy Duchess Kate This Gift