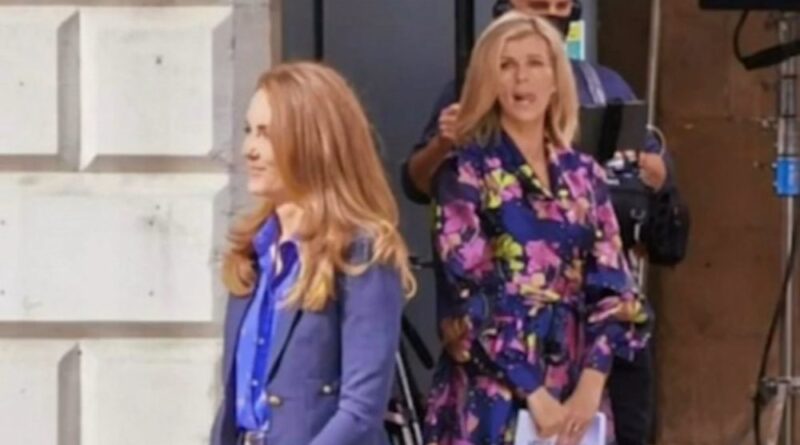 On Tuesday, Prince William and Kate were photographed filming for Pride Of Britain Awards with Good Morning Britain’s Kate Garraway, following their visit to Waterloo.

And now, Kate Garraway admitted that she asked the Duchess a bit of a cheeky question. Chatting about the meeting to co-host Ranvir Singh, Garraway said: “I have to say, I did have to ask her about her hair. Her new blonde, it is fabulously glossy in person, I can report.”

However, she didn’t reveal if the Duchess of Cambridge gave her some haircare tip.

Speaking about their meeting, Garraway said: “So this was yesterday,” began Kate. “It was a great honour for me, I got to spend a bit of time with them because they were giving their time…”

Ranvir interrupted: “They look like they are ignoring you there.”

“Yeah they looked like they are blanking me,” laughed Kate. “I actually just sort of followed them for the day.

“No no, they were taking part in something for the Pride of Britain Awards on ITV on November 1.

Ranvir interjected: “Because of course, we can’t have the big event like we would normally have.”

Garraway agreed: “We can’t have the big live event with the red carpet and all of that, they’re doing it slightly differently this year, but it’s very, very moving and they’re involved in that.”

For the engagement yesterday, the Duchess of Cambridge traded her long red coat by Alexander McQueen for a tailored blue suit paired with a light blue button-down. Prince William was matching, dressed in a navy suit with a light blue shirt.

It marked the first time she has been involved with the Pride of Britain awards. But, Prince William has already attended the ceremony.