In his most recent engagement, Prince William made a moving visit to The Royal Marsden hospital in Sutton, Surrey. There he laid the foundation stone of its new cancer center, 30 years after his mother Diana, Princess of Wales, laid one at The Royal Marsden in Chelsea.

The Duke has always been following in his mother’s footsteps; For example for becoming the President of the Royal Marsden NHS Foundation Trust in 2007.

Back in June 1990, Princess Diana was pictured wearing a hard hat with the letters “HRH” on it when she laid the ceremonial stone to commemorate the building of the Chelsea Wing at the London Hospital.

During one of the dozens visits that the Princess did, she was photographed wearing scrubs as a way to highlight the work being done by surgeons at the world-famous hospital, with her son William doing the same thing during his visit in 2018.

At the event, Prince William met and spoke with both staff and patients, before and after the ceremony to launch The Royal Marsden Cancer Charity’s public appeal to raise the final amount to build its new Oak Cancer Centre at the Sutton site.

With this research and treatment facility, more than 400 researchers will be situated under the same roof as patients, which will speed up the development of new treatments. At the moment they hospital charity has raised around 62 million pounds of their goal of 70 million needed to complete the centre, which is scheduled to open to patients in 2022.

With his conversations with the patients, the Prince learned about how the clinical trials at The Royal Marsden have changed their lives, as well as their experiences of treatment during the global pandemic.

He also found out about the studies launched by The Royal Marsden, which will be investigating the effect the pandemic has had on cancer treatment and care, and about the Surgical Cancer Hub, it helped to form to provide cancer surgery to patients from across the country.

The Royal Marsden has been functioning for almost 2 centuries, being opened in 1851 as the first dedicated cancer hospital in the world, which focuses on diagnosis, treatment, research and education. The patron of The Royal Marsden NHS Foundation Trust is the Queen. But if William keeps up the good work, he might be looking at another responsibility given to him.

READ NEXT: Prince William And Kate Spotted Filming For Pride Of Britain Awards 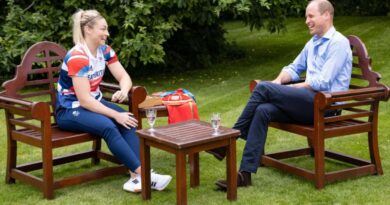