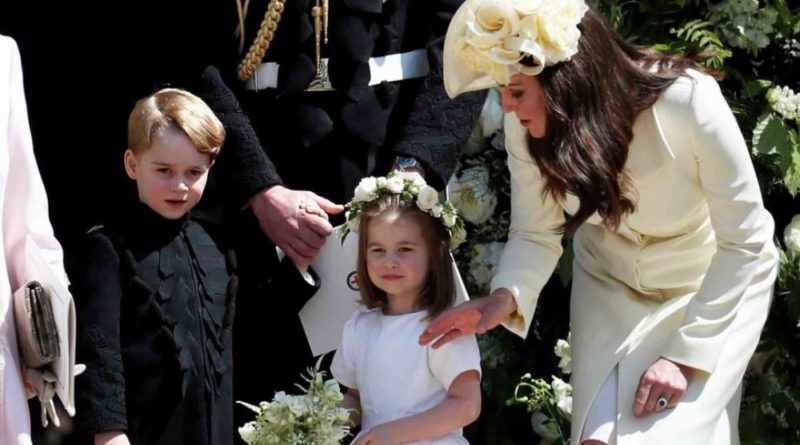 Kate took her two eldest children, Prince George and Princess Charlotte to go see the musical production of Mary Poppins in the West End; even though the Princess is technically a year too young to attend the show.

The rules of Prince Edward Theatre state that children under five cannot attend the shows. While it was no problem for Prince George, who is six, Princess Charlotte is only four, so it comes as a surprise that the little royal was allowed to attend. Prince Louis, who is only one, was left back home with his father or nanny.

A theatre spokesman said: “There was a private visit earlier this week.” Two weeks ago the Cambridges actually met with members of the Mary Poppins musical cast at the Royal Variety Performance.

There Prince William and Kate got the chance to talk with Petula Clark, who plays the Bird Lady, saying: “I love Mary Poppins!”, to which Ms Clark, 87, said that he should bring George, Charlotte and Louis to the show. To this, Kate replied with :”They would love it.”

And it seems that the royal kept her word earlier this week by taking her two oldest to the show. The three royals were seen by other audience members. Simon Andrew, who was also at the show, was surprise at how much the royals enjoyed the show.

Like any other royal fan, he went and shared a post on Facebook to The Musical Theatre Appreciation Society, writing: “Who’s the most famous person you’ve sat next to at the theatre?

“Previously for me it was the gay ginger one out of Modern Family at Book Of Mormon a few years ago.

“But I’m topping that right now as I’m sat right next to Kate, George and Charlotte at Mary Poppins at the Prince Edward Theatre.”

The rules state that the age restriction for under-fives is due to the production containing “theatrical smoke and fog effects, pyrotechnics, strobe lighting and loud noises”.

The Mary Poppins musical, starring Zizi Strallen in the lead role, is showing at the theatre until June of next year.

The show has been made by theatre impresario Sir Cameron Mackintosh, and Downton Abbey creator Julian Fellowes.

The songs include the classics Jolly Holiday, Step In Time and Supercalifragilisticexpialidocious.

Julie Andrews, who starred in the original film alongside Dick Van Dyke, 94, famed the line: “Just a spoonful of sugar helps the medicine go down, in the most delightful way.”

READ NEXT: Kate Middleton Debuted A New Diamond Ring At The Diplomatic Reception