It’s not easy being the mother of three children, all under the age of four. So one must be prepared, and the Duchess of Cambridge does know her stuff. Over the weekend Kate attended a charity polo match in Gloucestershire with her son Prince George and Princess Charlotte, and as one might know kids don’t have a big attention span or a tendency of staying put. However Kate came prepared, and from the photos we got from the event, the children showed interest in her Victoria Beckham bag. George, four, and Charlotte, three were seen constantly peeking into their mom’s designer handbag, which actually also fulfilled the role of toy treasure chest. Inside was George’s colorful slinky as well as his police toy kit, which included plastic handcuffs, a pair of guns and walkie-talkies. Thoughtful mom Kate also packed snacks and bottles of water for the kids, on what was a very sunny day at the Beaufort Polo Club, where Prince William took part in the charity polo match.

Kate looked as glamorous as ever at the polo, nailing her off-duty look in a £39.99 summer dress by Zara, one of her favorite high-street designers. The casual striped blue midi number showed off her fabulous and athletic post-baby body. It was a new item for Kate, who has previously worn her elegant Victoria Beckham bag at official outings; last year she was pictured carrying the white tote at Wimbledon. The elegant handbag, made of textured white leather, comprises 90 percent buffalo leather and ten percent calf leather; it features an adjustable strap that can be removed, a canvas lining, and interior pockets. The all-purpose bag originally retailed for £995. Kate is not the only royal who is a fan of Victoria Beckham. Her new sister-in-law Meghan Markle wore a white cashmere jumper by the British fashion designer for her visit to Belfast in March. The knitted top, which Meghan famously donned for her engagement photographs, cost £690 and instantly sold out after Meghan wore it. The Royals also appear to be good friends with the Beckhams; David and Victoria were invited to both William and Kate and Harry and Meghan’s big days in 2011 and 2018, respectively. 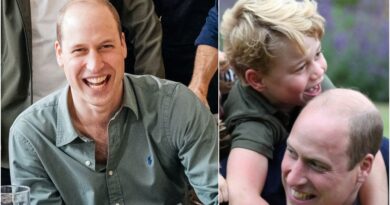