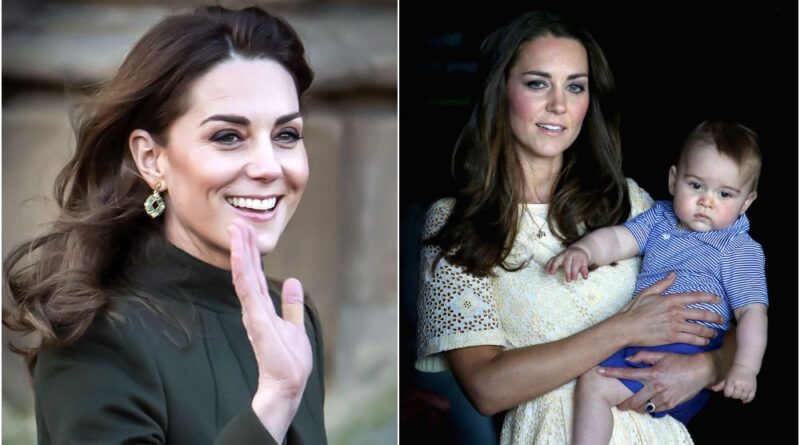 During William and Kate’s visit to Bradford on Wednesday, they spent some time with families from the Older Yet Wiser project.

The duchess was introduced to a group of women who were midway though crocheting and showed her hearts and blankets they had made for her children; Prince George, Princess Charlotte and Prince Louis.

Chatting with them about knitting, Kate revealed one mishap she experienced not long after she gave birth to Prince George.

She told them: “I tried knitting when I first had George. I tried to knit him a very special jumper, but I got half way down and it splattered. It’s such an amazing skill.”

While at the Khidmat Centre, William and Kate also joined in a session of the Older Yet Wiser project.

As the group sang the “banana song”, the Duchess picked up 18-month-old Sorayah Ahmad and danced with her. Kate later played a game of peekaboo with her.

Prince William and Kate were also shown a huge cake which tells the story of both of their lives to date through edible photos.

When the Duchess saw the cake, she said it was “really clever”, adding: “That’s incredible.”

On Wednesday, Prince William and Duchess Kate traveled to Bradford to “visit a number of projects which support the community and promote cohesion within it”.

The couple began their visit at Bradford City Hall, where they spoke with youngsters about life in the city and with local employers helping them to get jobs. As a final engagement of the day, William and Kate joined a workshop run by Near Neighbours.

Before they left, social entrepreneur Kamran Rashid asked the couple for their opinion of the city.

William replied: “You can see that communities are trying to come together, trying to help each other, get to know each other and that is really crucial.

“If we can replicate that more across the country then it can only be for good.”

READ NEXT: William And Kate Visit Bradford As First Joint Engagement Of The Year