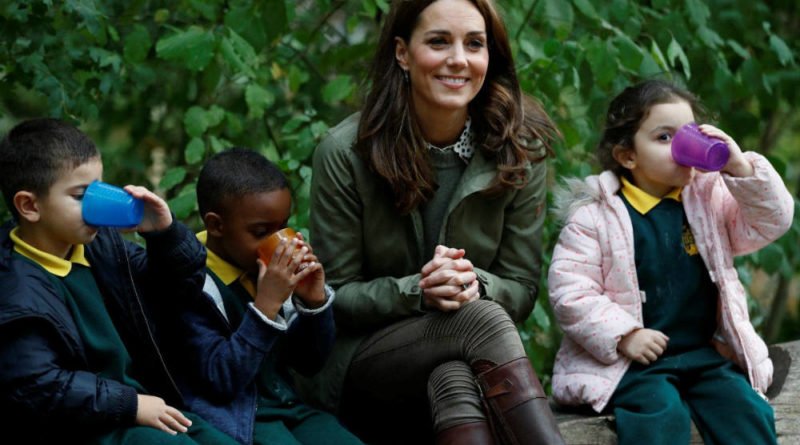 When asked about that by a little girl, Kate had the perfect response.

Marking her first official engagements after returning from maternity leave, Kate visited the St. Stephen’s School in London on Tuesday. There she spent some quality time outdoors with a group of students who attend there.

While most of the children were amazed by the very presence of Kate Middleton, one inquisitive little girl had something else on her mind and was more concerned by the photographers at the event.

“Why are they picturing you?” the little girl asked Kate, 36, in footage obtained by The Royal Family Channel.

Without missing a beat, the royal mom-of-three sweetly responded, “They’re picturing you cause you’re special!” as she took the girl by the hand and they walked towards the picnic table together.

Kate had multiple interactions with tons of students. One such was with Anwaar, a little girl who did her best to impress her royal visitor. As they sat down on a log for some storytime, the young girl cuddled up to the Duchess, and the 4-year-old tried to impress the royal by drinking out of her cup without using her hands. And we might say that the Duchess was impressed indeed. Kate couldn’t help but laugh, as the student threw her head back with the cup in her mouth and then yelled out: “More!”

The young girl, who Headteacher Simon Atkinson said had chattered eagerly all day about meeting “the princess,” lovingly admired a casual-dressed Kate while sitting alongside her. Zoe Stroud, interim Head of Sayers Croft Forest School, said Kate “was lovely — although she said the only mini beast she managed to find on the hunt was a slug! But she did see a frog under a log.”

“She really gets what we are doing here and said she often takes her children on spider hunts in their garden, which they love,” Stroud added. “They can spend hours out there.”

Being a mom of three, Kate knows her way with children. This was most prominently seen at Prince William’s charity polo match over the summer, as the royal used every mom trick she had to keep her two older children, Prince George, and Princess Charlotte entertained. “Kate is a fantastic mum,” an onlooker at the match told PEOPLE. “She was calm with the children.”

At one point, “She seemed to say to [George and Charlotte], ‘First to the polo field is the winner!’” the observer added. “She was trying to get them tired before they had to get back in the car to leave.”

Kate also revealed that one of her favorite pastimes with her children was “hunting spiders” and that sometimes they would hunt them in the garden for hours.

Ever since Kate and William set up their country home in the rural county of Norfolk in 2014, the couple has been hosting parties at the magnificent Anmer Hall and taking part in the annual shoots around Queen Elizabeth’s Sandringham estate.

READ NEXT: How George And Charlotte Are Being Prepared For Royal Duties?

William Reveals What Makes Dinner With George, Charlotte And Louis A ‘Success’