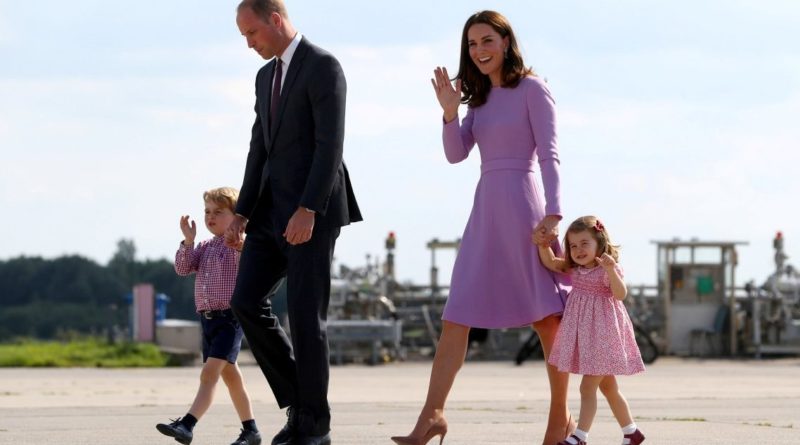 Prince William and his wife, Kate Middleton follow a strict royal tradition when it comes to public engagements-a tradition that Prince George and Princess Charlotte have started to copy from their parents.

Both the Duke and Duchess of Cambridge are public favorites, due to their charisma elegance, when they gracefully stroll past fans during public engagements, waving as day do.

Even though some might find it as a normal thing, Kate and William are actually following a long-standing royal tradition. It is mandatory for royals to wave at members of the public during royal engagements. And now Prince George, 5, and Princess Charlotte, 4 have started doing the same.

They must have seen it from their parents, and are often seen waving at the public with their left hand. This is due to the fact that both George and Charlotte are left-handed, just like their father, Prince William. William believes that this is a sign that the children will be a “brain box”, as left-handedness is usually associated with intelligence. The royal gesture, officially known as the Windsor wave, is just a more subtle and understated version of the regular wave- and it has been practiced by the royals for centuries.

READ NEXT: How George And Charlotte Are Being Prepared For Royal Duties?

Kate-on the other hand’-is right-handed, and she is often seen using her dominant right hand when she waves at the public.

Upon joining the royal family, both Kate and Meghan Markle, her sister in law, had to master the royal technique.

Explaining how the wave works, Grant Harrold, who is known as the Royal Butler said: “The wave we saw on the Duchess of Sussex’s engagement was what we all would do on a day to day basis when waving at someone. “However, the wave we saw on her wedding day is that more fitting of a royal. It was graceful, dignified, elegant and similar to the wave we would expect of members of the royal family.”

He added: “When she greeted press photographers on the day the engagement was announced Meghan’s wave was somewhat clam-like, with her fingers rapidly opening and closing against her palm.

“She will need to learn the more restrained (and easier on the hand) ‘Windsor wave’, which is much more subtle and less tiring.

“Her arm should extend upwards at a right angle and the hand then moves from side to side in gentle right-left motions.”

George and Charlotte have always been well-behaved kids during any kind of royal event, and never fail to charm the public with their super-cute waves.

Last week, both of the young royals attended the wedding of Sophie Carter, their mum Kate’s close friend, to Robert Suggs. Both of them also had roles for the ceremony.

George, who is third-in-line to the throne, looked smart in a white shirt with blue shorts, white stockings, and white loafers as he fulfilled page boy duties.

Meanwhile, shy Charlotte, who was a flower-girl, looked adorable in a white ruffled dress with a flower crown.

This isn’t the first time that Prince George and Princess Charlotte have had roles during a wedding ceremony-as earlier this year, at their uncle Prince Harry’s wedding in May, George had the role of pageboy, while Charlotte was a flower girl.

READ NEXT: Kate’s Sweetest Response When Asked About Why Photographers Are Picturing Her