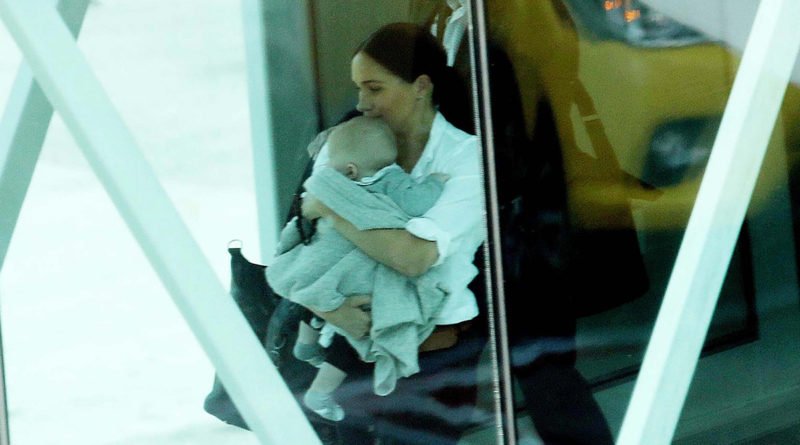 On Saturday, mom Meghan and baby Archie have been photographed as they left Cape Town for Johannesburg where they will reunite with dad Harry on Tuesday.

The Duchess carried her baby son, on to a British Airways flight at Cape Town International Airport, and was expected to land in Johannesburg around 4 pm. In the photo, Meghan can be seen dressed in a white shirt and black as she made her way across a glass airbridge with Archie.

Meanwhile, Prince Harry has carried out his last engagement in Angola. The Prince will move onto Malawi tomorrow, before joining back up with Meghan in South Africa. Then the couple will finish off their tour with high-profile meetings with Nelson Mandela’s widow Grace Machel and the country’s President Cyril Ramaphosa.

Meghan’s departure comes after it was revealed that she had made a secret visit to the site where University of Cape Town student Uyinene Mrwetyana, 19, was brutally murdered.  She paid tribute by leaving a handwritten message which read: “Harry & Meghan 26th September 2019.” In addition, she wrote, “We stand together in this situation,” in the native language of Xhosa.

The Sussex Royal Instagram account, also revealed her visit officially earlier this morning. The Instagram photo was accompanied by a caption, which read: “The Duchess of Sussex has tied a ribbon at the site where 19-year-old Cape Town student Uyinene Mrwetyana was murdered last month, to pay her respects and to show solidarity with those who have taken a stand against gender-based violence and femicide. Over the last month in Capetown, protests erupted through the streets in outrage over GBV in South Africa.

“The Duke and Duchess had been following what had happened from afar and were both eager to learn more when they arrived in South Africa. The Duchess spoke to the mother of Uyinene this week to relay their condolences. Visiting the site of this tragic death and being able to recognise Uyinene, and all women and girls affected by GBV (specifically in South Africa, but also throughout the world) was personally important to The Duchess.

“Uyinene’s death has mobilised people across South Africa in the fight against gender-based violence and is seen as a critical point in the future of women’s rights in South Africa. The Duchess has taken private visits and meetings over the last two days to deepen her understanding of the current situation and continue to advocate for the rights of women and girls.”