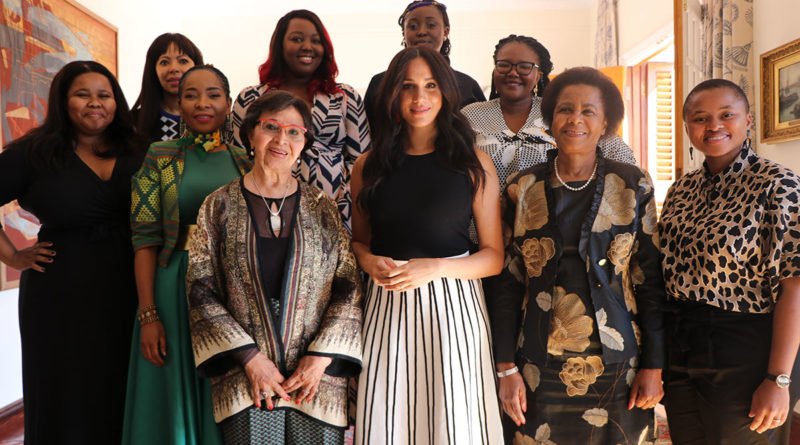 Meghan Markle just released a rallying cry to all young female activists to “keep at it” for the sake of future generations. This statement comes after she had seen herself the struggle of women and girls that are facing an epidemic of gender-based violence in South Africa. The Duchess of Sussex met with women leaders in Cape Town of a private breakfast meeting, where they talked about the issue, with Meghan saying:

“I have been so moved by what I have heard. The leadership and strength shown by these women are remarkable, and at a time when the issue of gender and gender-based violence is at the forefront of people’s minds, I hope their voices will resonate and not only give comfort but also create change. “This is not just a South African issue, this is a global problem that can only find a solution with the attention and work of everyone, regardless of gender, status, politics, race or nationality.”

She told the guests, from the worlds of business, politics, banking and academia: “We can learn a certain amount from the outside, by tracking it through the news, but it’s not the same as being able to truly understand what it’s like on the ground. Much of my life I have been advocating for women and girls’ rights, so this has been an incredibly powerful moment to hear first-hand from all of you.”

The problem of violence against women and girls has been declared a national emergency by South Africa’s President Cyril Ramaphosa, with widespread protests that occurred after the brutal rape and murder of Ulyinene Mrwetyana, 19, in August in a post office.

The Duchess had in her mind to visit the murder scene as a way to pay tribute to the University of Cape Town student, but after her last meeting last Thursday she decided to go immediately and went straight to the site following her engagement.

There she left a ribbon, with a message written on it in the Xhosa language, “Simi kunye kulesisimo”, which means ‘We stand together in this moment’ and signed it “Harry and Meghan”.

During her breakfast meeting, she met with Sophia Williams-De Bruyn, who in 1956 led 20,000 women to march on the Union Buildings in Pretoria in protest against apartheid pass laws. She is the last living leader of the march, which she led at the age of 18.

Meghan told the women: “I was recently reminded that the first one up the mountain often gets knocked down the hardest, but makes way for everyone behind them. These brave women have been able to see how their struggle can pave the way for so many. For all young women organisers, activists and campaigners today, you must keep at it and know that you are working for this generation and the next, and also continuing the legacy of the generations of great women before you.”