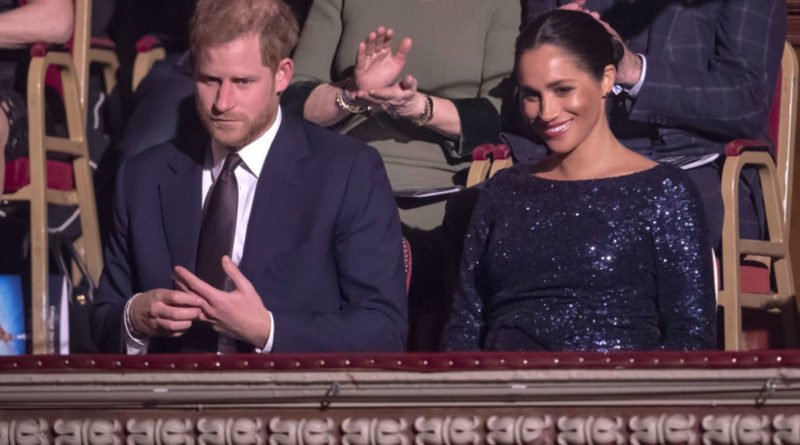 On Wednesday evening, Harry and Meghan attended the Cirque Du Soleil. The couple were guests of honour at the special event, which took place at the Royal Albert Hall.

For the occasion, pregnant Meg opted for a  sparkly navy dress with three-quarter length sleeves and a leg slit by Roland Mouret and combined it with a clutch by Givenchy.

She also paid tribute to Princess Diana with a detail. Eagle-eyed fans noticed a gold bracelet on her wrist. And apparently, it once belonged to her late mother-in-law Diana. The gold bangle features two dark-coloured stones.

Lady Di was seen wearing the elegant bracelet during an outing to an elderly people’s home in Newham, east London, in 1990. Kensington Palace has tweeted: “The evening will raise awareness and funds for Sentebale’s work with children and young people affected by HIV.”

Tonight’s event began with Prince Harry and Meghan meeting representatives from the charity and members of the Totem cast.

As the show began, a character named Valentino, played by John Monastero, delivered an introduction: “Not only is it our premiere, but we also celebrate the beginning of a new partnership between Cirque Du Soleil and Sentebale. Just by being here tonight, you are allowing Sentebale to provide young people with the tools, emotional support and the networks to lead healthy, hopeful and productive lives.” He continued: “We are also incredibly honoured tonight to welcome The Royal Highnesses the Duke and Duchess of Sussex.”

And the Sussex stood up to acknowledge the audience from the royal box to applause from the hall.

The event is the second in a series of fundraising events for Sentebale the first of which saw the couple attend a charity performance of Hamilton at Victoria Palace Theatre in August 2018.

Harry founded Sentebale with Prince Seeiso in 2006 after spending his gap year in Lesotho in 2004.

The men founded Sentebale in memory of their mothers. The name of the charity means forget-me-not, which Harry later found out was his mother Diana, Princess of Wales’s favourite flower growing up. Johnny Hornby, chairman of Sentebale, said: “We’re very grateful to everyone at Cirque du Soleil for giving us the opportunity to shine a light on the work that Sentebale does to help children and young adults affected by HIV to live happy, healthy and productive lives.”

Meghan also supported Harry’s notable cause when she attended the Sentebale Polo Cup at the Royal Berkshire Polo Club in July 2018as Harry played polo.

READ NEXT: Meghan Carried Out Her Cutest Engagement Today! It Includes Dogs!