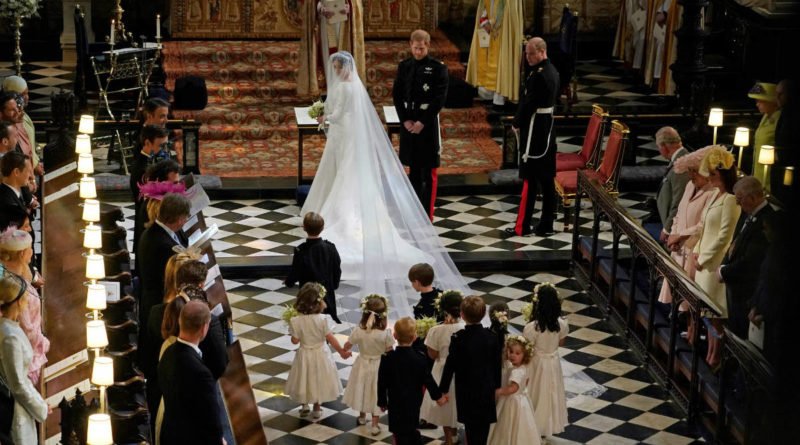 The new documentary: Queen of the World, features many details about the royal family that we didn’t know.

In the trailer that was released last week, we saw Meghan reunite with her gorgeous Givenchy wedding dress.

Today, a new video has been released. Meghan opens up the discreet addition to her elegant gown during.

The Duchess of Sussex has revealed that her dress on her wedding day contained ‘something blue’ from her first ever date with Prince Harry. Apparently, she took blue fabric from the dress she was wearing when she first met the Prince.

The Duchess of Sussex explains the special way her wedding dress paid tribute to the Commonwealth in the upcoming @ITV documentary series, ‘Queen of The World.’ #QueenOfTheWorld pic.twitter.com/IGJscliHtX

“Somewhere in here there’s a piece of blue fabric that’s stitched inside — it was my something blue,” Meghan remarks while inspecting the veil in the video above.

Sweetly, she adds, “It’s fabric from the dress that I wore on our first date.”

Meghan wore a gorgeous Givenchy gown and a veil that featured gorgeous, intricate embroidery. It was embroidered with flowers from each of the 53 Commonwealth nations.

Meghan also opened up about the stunning embroidery on the veil, and how each flower represents one of the 53 nations of the Commonwealth.

READ NEXT: One Thing That Went Wrong In The Run Up To Harry And Meghan’s Wedding

The delicate 16ft veil also featured wintersweet. The Wintersweet grows in the garden at Nottingham Cottage, where she and husband Harry live.

Meghan recalled: “It was important for me, especially now being a part of the Royal Family, to have all 53 of the Commonwealth countries incorporated, and I knew that it would be a fun surprise as well for my now husband, who didn’t know, and he was really over the moon to find out that I would make this choice for our day together.

“I think the other members of the family had a similar reaction, so, yeah, it was good news all around, I think. I hope people liked it as much as I liked helping to create it.”

Meghan explained: “The thinking behind for me, [was to include] some sort of representation of all 53 of the Commonwealth countries which were key.”

“I’d originally said to Clare Waight Keller, the designer, how can we incorporate that? Would it be the state flower, the country flower of each place? And it was her idea to do wildflowers, which I think ended up being a really beautiful way to embody the feeling of it.” She continued: “No specific flower repeats itself. I know that was part of how they had put everything together, but I hoped when people come, they can find their flower from their country…

“I stuck in a couple of flowers that were important to me as well personally, but there is a California Poppy in there which has nothing to do with the Commonwealth, but it’s where I’m from.”

As for her wedding outfit, Meghan says: Meghan says, “I hope people liked it as much as I liked helping to create it.”