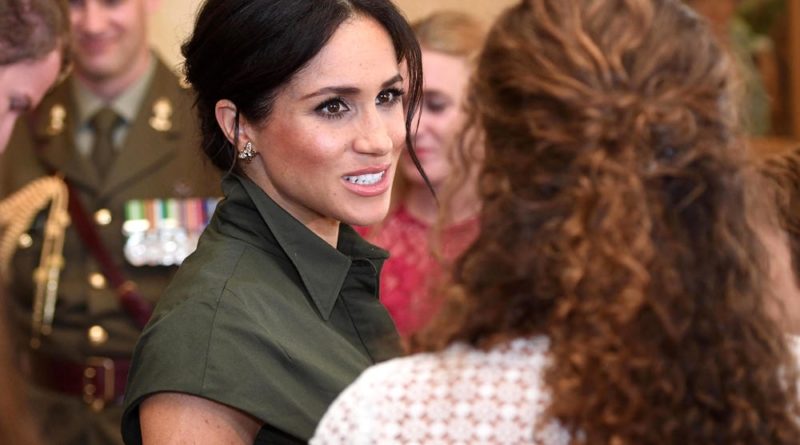 Harry and Meghan have started their first official Royal tour as a newlywed couple, just hours after Kensington Palace announced they are expecting their first child. They arrived shortly before the news was revealed.

As a part of their tour, the couple attended a reception hosted by the Governor General of Australia in Sydney.

During the reception, Meghan had a chat with the guests. Among them was Australian TV personality Eddie Woo, who said his own children require “a lot of energy.”

Kensington Palace revealed that the couple’s first baby is due next spring, just hours before they started their first overseas tour together, with Meghan saying they are both “excited” about parenthood.

The couple received their first baby gift during their morning engagement. They were given a toy kangaroo and its Joey: “Our first baby gift!” said an excited Meghan. Prince Harry was given a tiny pair of Ugg boots. “These are awesome,” he said. At the same venue hours later Harry said: “We couldn’t think of a better place to announce the upcoming baby.”

It was at the same venue hours later where Harry spoke about being a father-to-be, and how he “genuinely couldn’t think of a better place” to make the wonderful announcement.

“This is my wife’s first visit here so I’m very excited to show her this wonderful country of yours,” Harry said.

“Thank you, Your Excellency and Lady Cosgrove, for giving us your magnificent home for the week. We are inviting all of our mates in Sydney to visit. “And we also genuinely couldn’t think of a better place to announce the upcoming baby, whether it’s a boy or a girl, so thank you very very much.

“We are really impressed to see you serving beer and tea at an afternoon reception in true Aussie style.”

During their first day in Sydney, Harry and Meghan were introduced to another Meghan and Harry; the koala bears named after them.

The Duchess called the animals ‘so, so sweet’.

READ NEXT: Meghan Is Already Showing Her Motherly Side With Baby Koala During Visit To Sydney Zoo

Why George Had Different Education Star Than Charlotte And Louis