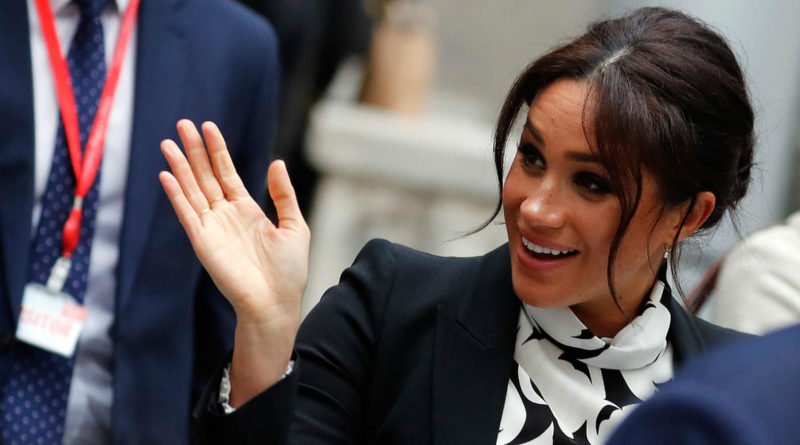 Meghan had some jokes about her baby bump as she took the stage for an event to mark International Women’s Day.

The Duchess of Sussex looked as wonderful as ever, in a stunning black and white dress combined with a smart blazer for the panel discussion hosted by the Queen’s Commonwealth Trust. The future-mother finished off her look with her trademark stilettos and a small clutch bag. For her hair she went with a simple yet nice bun, giving her a chance to show off her elegant pair of earrings. Along with the Duchess, lots of leading feminists and national figures attended the event at King’s College London. During the panel which includes the like of Annie Lennox and former prime minister of Australia Julia Gillard-lots of issues that were affecting women today were debated.

Meghan replied ”very well” and revealed she had been watching a “documentary about feminism on Netflix and one of the things they said during pregnancy was ‘I feel the embryonic kicking of feminism’.”

She added: “I loved that – boy or girl, whatever it is, we hope that’s the case.” On the selling of feminism to men and boys, Meghan told the audience: “I’ve said for a long time you can be feminine and a feminist, you can be masculine.

“And I think in terms of masculinity you understand that your strength includes knowing your vulnerabilities and your sense of self and security, and your confidence comes from knowing a woman by your side, not behind you, is actually something you should not be threatened about – as opposed you should feel really empowered in having that.” The Duchess also emphasized that she does not read newspapers or use Twitter. She said: “I don’t read anything, it’s much safer that way, but equally that’s just my own personal preference because I think positive or negative it can all sort of just feel like noise to a certain extent these days, as opposed to getting muddled with that to focus on the real cause.

READ NEXT: How Meghan Is Already Taking Care Of Her Baby’s Mental Health?

“So for me, I think the idea of making the word feminism trendy, that doesn’t make any sense to me personally, right? This is something that is going to be part of the conversation forever.”

This statement comes just hours after the Duchess was handed a new role as vice-president of the trust, joining her husband Prince Harry, who is president. The organization, which has the Queen as patron, has the goal of supporting and funding young leaders around the world who are working to tackle problems in education, health, the environment and sport. The trust said in a statement: “In this new role, the Duchess will highlight the trust’s partnerships with young people across the Commonwealth, and in particular its work supporting women and girls.”

Meghan, who is expecting her first child with Harry sometime in April or May, has been a proud feminist for a long time and has campaigned for women’s rights even at a young age. Our favourite Duchess was only 11 when she accused a washing-up liquid company’s TV advert of being sexist, with it being changed thanks to young Meghan’s campaign. That culminated in 2015 when Meghan became the UN Women’s Advocate for Women’s Political Participation and Leadership. On International Women’s Day that year she gave a speech about gender equality, saying: “I am proud to be a woman and a feminist.”

Since becoming a royal, nothing has changed, with Meghan continuing her work to promote feminism.

During her overseas tour with Prince Harry last October, Meghan spoke at a reception at Government House in Wellington to celebrate the 125th anniversary of women’s suffrage in New Zealand.

The 37-year-old said: “In looking forward to this very special occasion, I reflected on the importance of this achievement, but also the larger impact of what this symbolises.

She gave another powerful speech about women’s education at the University of the South Pacific in Fiji.

At the beginning of this year, the Duchess of Sussex finally revealed her first royal patronages, with women’s charity Smart Works among the four organizations.

READ NEXT: The Queen Appointed Meghan To A New Role On Iconic Day