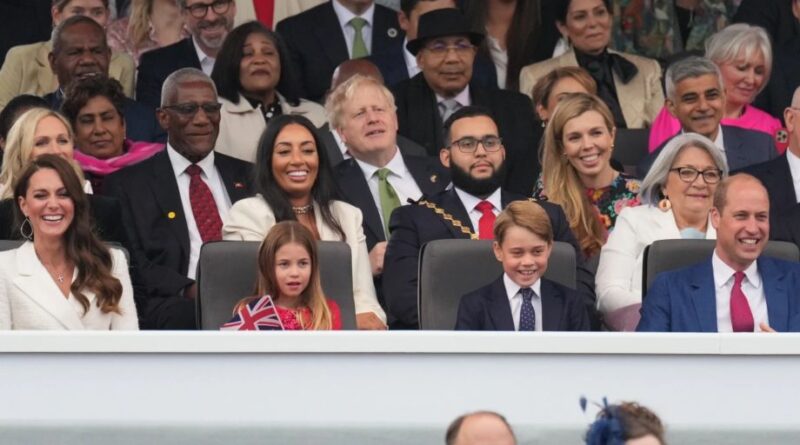 On Saturday evening, Prince George and Princess Charlotte have joined Prince William and Kate for the Queen’s Platinum Jubilee concert.

Both of the Cambridge girls look very beautiful, Duchess Kate is flawless in a white power suit by Self Portrait, while Charlotte is wearing a red dress and cardigan. The boys, Prince William and George, are donning navy suits.

Tonight, the Queen opened the doors of Buckingham Palace to 22,000 guests on Saturday for a star-studded “Platinum Party” celebrating the U.K. and Commonwealth’s contributions to fashion, sports, the environment and music during her record-breaking 70-year reign.

The Queen isn’t attending the festivities, due to her ongoing mobility issues. However, she recorded a hilarious clip with Paddington Bear, which was screened before the performances began.

Other royal family members attending the show included Prince Charles and Camilla, Duchess of Cornwall; Prince Edward and Sophie, Countess of Wessex with their children Lady Louise and James, Viscount Severn; Princess Anne and Sir Timothy Laurence; Princess Beatrice and Edoardo Mapelli Mozzi; Princess  Eugenie and Jack Brooksbank; Peter Phillips and his daughters; Zara and Mike Tindall; the Duke and Duchess of Gloucester; the Duke of Kent; Prince Michael and Princess Michael of Kent and Sarah Chatto and her family.

Earlier today, William and Kate also took George and Charlotte to Cardiff Castle to watch rehearsals and meet performers and crew involved in the special Platinum Jubilee Celebration Concert, including Welsh singer Bonnie Tyler who was last week made an MBE.

READ NEXT: Prince George And Princess Charlotte Join William And Kate In Cardiff