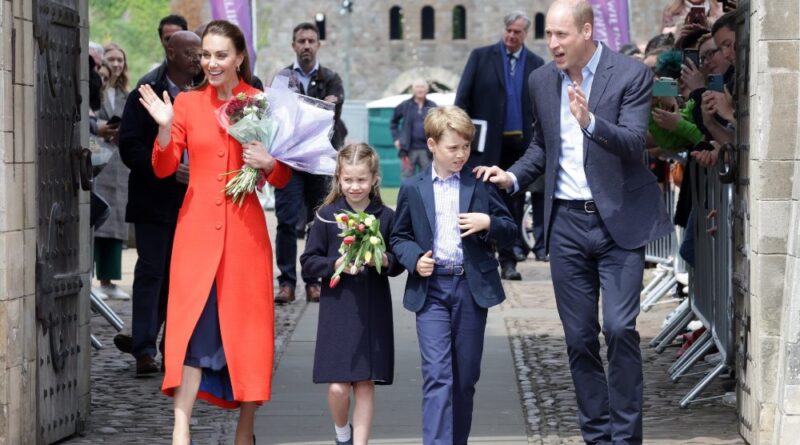 The third day of the Platinum Jubilee celebrations started with a big surprise for royal fans. Prince William and Kate arrived with Prince George and Princess Charlotte at Cardiff Castle.

Despite stealing the show at Trooping the Colour on Thursday with his adorable appearance on the Buckingham Palace balcony, this time Prince Louis stayed at home.

During the visit, the Cambridges will watch rehearsals and meet performers and crew involved in the special Platinum Jubilee Celebration Concert, including Welsh singer Bonnie Tyler who was last week made an MBE.

Prince William, Kate and the children will also learn more about the technical production underpinning the show, including lighting and sound and visual effects before they help with some of the final preparations for the concert.

For today’s visit, Duchess Kate looked elegant in a red Eponine coat dress with her hair up in a ponytail. Her daughter, Princess Charlotte was pictured wearing a dark blue coat with a pretty button detailing down the front.

Just like her mother, it seems as though she chose to recycle her latest look. Her coat seems to be the same to the one she wore to her great-grandfather at Prince Philip’s service of thanksgiving in March 2022.

The Cardiff event will finish at 7 p.m U.K.-time, allowing the audience to then watch the Platinum Party at the Palace on big screens set up on the grounds of the castle.

The concert will be broadcasted on the BBC and will feature performances from Diana Ross, George Ezra and UK Eurovision entry and runner-up Sam Ryder.

READ NEXT: William And Kate Sit Opposite Harry And Meghan During Jubilee Service

The Nickname Harry And Meghan Call Their First Baby