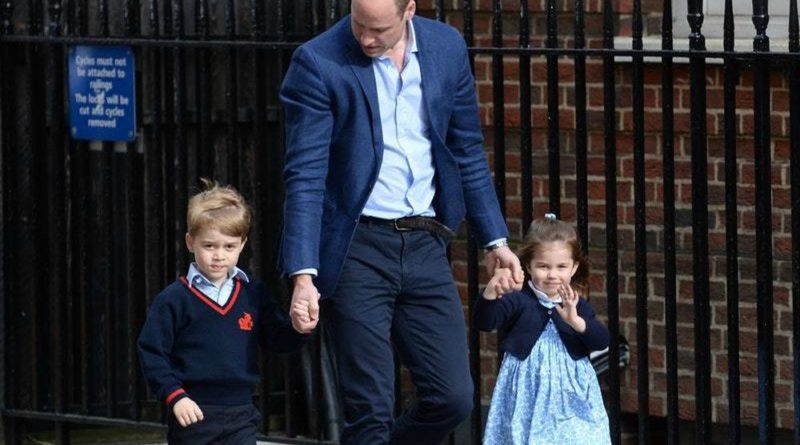 Prince George and Princess Charlotte have just arrived at Lindo Wing of St. Mary’s Hospital to meet their baby brother.

George and Charlotte were at home where their nanny Maria Teresa Turrion Borrallo was taking care of them. Prince William left the hospital to pick them up and brought them to see the new baby.

The kids looked really excited and smiling entered the hospital. Prince George clearly had just finished with school because he was still wearing his uniform. Charlotte was wearing an adorable little blue floral dress and a navy cardigan. She waved to the cameras many times as they walked into the hospital.

William and Kate welcomed their third baby 7 hours ago. Kensington Palace shared that the Duchess of Cambridge has given birth to, a boy weighing 8 pounds, 7 ounces at 11.01am.

Kesington Palace released a statement: “Her Royal Highness The Duchess of Cambridge was safely delivered of a son at 1101hrs.

“The Duke of Cambridge was present for the birth.  Her Royal Highness and her child are both doing well.”

The new royal baby is the Queen’s sixth great-grandchildren. The baby will bump Prince Harry into sixth place. The baby’s title will be HRH Prince or Princess of Cambridge.

So cute! Prince William arrives at the hospital with Prince George and Princess Charlotte to visit their new baby brother. pic.twitter.com/vHYf6ezY0l

The baby, the royal couple’s third, will be grandmother Queen Elizabeth II’s sixth great-grandchild and become fifth in line to the throne.

Prince William and Kate, just like for the previous pregnancies, didn’t know the gender of the baby before the birth.

The London Eye announced that it would light up in red, white and blue to honor the arrival of Prince George and Princess Charlotte‘s younger sibling.

READ NEXT: IT’S A BOY: Kate Middleton Gives Birth To Her Third Child