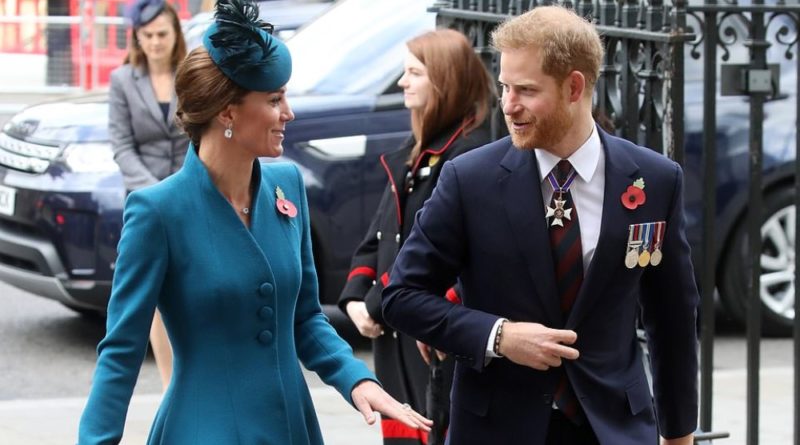 On Thursday, Harry and sister-in-law Kate joined forces for the Anzac Day service at Westminster Abbey.

Harry, whose first child is due any day now, joined Kate to honour the sacrifices of Australian and New Zealand forces in the bloody Gallipoli campaign of 1915. He was an unexpected guest at the Westminster Abbey service with wife Meghan expected to give birth any day now. Still, It’s understood that he always planned to attend the service and was pleased to be able to join the congregation.

Harry looked smart in a navy suit and wore his medals.

Harry and Kate looked to be in great spirits and sharing a nice moment as they entered the church.

The duo was greeted by the Dean of Westminster Dr John Hall who shook hands with them as they entered the Abbey’s west door. They were joined by the Queen’s cousin the Duke of Gloucester too. The traditional church service in London will incorporate an Act of Remembrance, the Last Post and the words of modern Turkey’s founder Kemal Ataturk from Anzac Cove, read by the Turkish ambassador to the UK. Elsewhere, William’s in New Zealand paying tribute at a service in Auckland to those who lost their lives in battle. William joined Prime Minister Jacinda Ardern and other dignitaries at the event at the city’s war memorial.

The last time we saw Kate and Harry together in public was when they joined the Queen for the Easter Sunday church service at St George’s Chapel.

At one point, Harry and Kate appeared to share a joke and were pictured laughing, flying in the face of claims of a royal row.

READ NEXT: 6 Lifestyle Changes Harry And Meghan Have Made Ahead Of The Birth Of Their First Child

What Kate And William Love Doing While On Holiday In Mustique