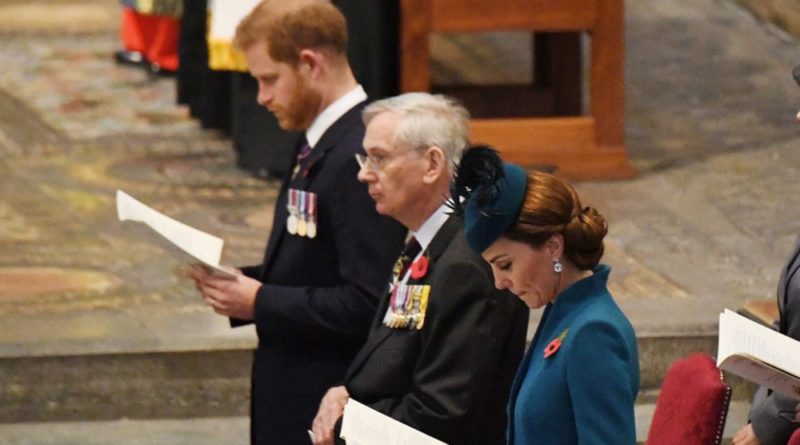 At the Anzac Day Service of Commemoration and Thanksgiving, the royal family was represented by the Duchess of Cambridge, Kate Middleton, and Duke of Sussex, Prince Harry, both without their significant others.

Alongside them was also the Duke of Gloucester. Although royal fans are used to seeing Kate take precedence at Westminster Abbey, of this engagement the honour was left to her brother-in-law Prince Harry. And the reason why is simple.

Because Kate attended without her husband William, who is actually at the moment on an official visit to New Zealand, so she was relegated to the seat furthest from the altar. Harry, who is sixth-in-line to the throne, took the seat closer to the altar and directly next to the Duke of Gloucester, who is the Queen’s paternal cousin. Blood royals always take precedence over non-blood royals.

Fans were a bit surprised to see Kate and Harry walk into Westminster Abbey together, as for Prince Harry this was an unplanned engagement. Normally, royals arrive in precedence, with the more senior members of the family arriving last.

In past engagements, Meghan and Harry would arrive before Kate and William would, but the royals tend to follow these stricter rules only when the Queen or Prince Charles is present. As Kate was unaccompanied by her husband, Prince Harry joined her as the two of them made their entrance.

Kate looked stunning in a teal Catherine Walker coat and a matching Rosie Olivia hat for her daytime outing. Kate finished her look with natural makeup that highlighted her pretty features and her hair up in an elegant chignon. Harry was also shining, in a great suit adorned with medals, as well as with his smile and overall joyful appearance. He is currently expecting his first child with his wife Meghan Markle, who was nesting at home in Windsor, preparing for the baby that can come any day now.

Harry had the engagement in his plan and was glad that he could join the congregation on Thursday. Because of the uncertainty of the birth of Baby Sussex, his name was not printed in the program in case he was unable to make it.

The royals mark Anzac Day every year to recognise the Australian and New Zealand Army Corps who died during the 1916 Gallipoli landings, and to pay tribute to the sacrifices of men and women in all wars. Over in Auckland, Prince William attended an Anzac Day service as part of his two-day visit to New Zealand to honour the victims of the Christchurch terrorist attack.

William And Kate Changed Their Profile Photo For A Special Reason