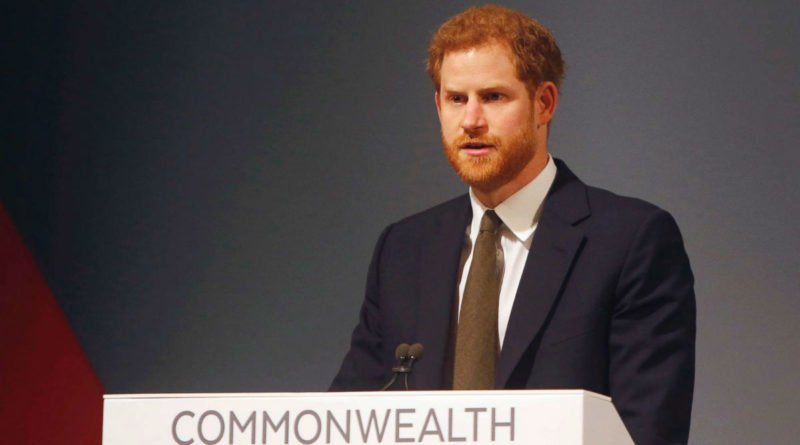 Prince Harry has revealed that his future wife, Meghan Markle will work as a youth ambassador to the Commonwealth and that he says that she is “hugely excited” to help young peoples voices be heard.

In his first speech as a Commonwealth Youth Ambassador, The Prince managed to tell us that he was “incredibly grateful” that the woman that he is about to marry will be joining him in his new job.

In a heartfelt speech, in which he gave tributes to both his grandmother, the Queen, and his father, the Prince of Wales, Harry told a room of Commonwealth youth representatives that he is ready to listen to their concerns and ideas.

While talking about how he’s now planning his first year in the job, Prince Harry jokes: “I know that serving as an ambassador to young people I am going to have to try to keep up with you.”

But with his new job come new responsibilities and it is expected that the couple will undertake overseas tours of the Commonwealth as well as convening young people to hear their ideas on how to give them a bigger platform.

The role of youth ambassador is a particularly important one as over 60% of the demographic from all 53 members that make up the Commonwealth, is under the age of 30.

Prince Harry’s speech started with a tribute to his grandmum, Queen Elizabeth II. He said: “When I was reflecting on how to make the biggest impact with this new role, I turned to the ultimate source of guidance on all things Commonwealth: the words of The Queen herself.

‘Her Majesty's commitment has meant that The Commonwealth is a thriving family of nations, a common link between nearly two and a half billion people, and a defender of democracy, justice, and peace.’ pic.twitter.com/xHwcZzbFIn

“On the day of her 21st birthday, the then Princess Elizabeth gave an extraordinary radio address in Cape Town. With an eye on the future and an already unflinching sense of duty, she made a commitment.

“She said that whether her life is long or short, it would be dedicated to the service of the people of The Commonwealth. All of us here today can be grateful that it is a long life The Queen is still enjoying.

“Her Majesty’s commitment has meant that The Commonwealth is a thriving family of nations, a common link between nearly two and a half billion people, and a defender of democracy, justice, and peace.”

The prince also mentioned his father as he pledged to listen to concerns about climate change: “The young adults I have met across the Commonwealth have shown me time and again that your generation understands something very important: that to tackle a big challenge, you need to focus on the root causes, not the symptoms – something my father has believed for years, yet something society still struggles with.”

Prince Harry and the Prime Minister Theresa May meet members of the Commonwealth Youth Council and Youth Taskforce to hear about the issues young people want championing during #CHOGM18. pic.twitter.com/rlJFLyloLj

Telling a hall full of young people that they would be the ones to change the world, Prince Harry said: “As I travel around the Commonwealth in my work on behalf of The Royal Family, it is striking to see just how different today’s generation of young adults is.

“You are connected. You have made positive use of technology to build relationships within your communities, nations and across the globe.

“You care. You want your nations to be cleaner, your planet to be greener, your friends and neighbors to be treated fairly and with respect, no matter their ethnicity, their religion, or their status.

“You are optimistic. The complicated challenges we face – climate change, inequality, conflict – they do not discourage you. Rather, they inspire you to persevere and effect change.”

The Prince concluded: “In my new role, I will work to support The Queen, my father The Prince of Wales, and my brother William, all of whom know that young people are the answer to the challenges of today.

“I am also incredibly grateful that the woman I am about to marry, Meghan, will be joining me in this work, of which she too is hugely excited to take part in.”

According to Baroness Patricia Scotland, who is Secretary-General of the Commonwealth the Queen couldn’t have given the greater gift to her grandson.

The speeches were delivered on the first day of forums leading up to the Commonwealth Heads of Government Meeting in London.
Along with the Prince, other notable figures also joined Queen Elizabeth II conference on Monday morning, such as Theresa May, the Prime Minister, to meet 18 young delegates from the Commonwealth.

Prince Harry has been appointed by HM The Queen as a #Commonwealth Youth Ambassador.

Prince Harry delivers powerful speech to the attendees of the #CYF pic.twitter.com/ulvd5GfG0s

In the meeting room, there were representatives from Malaysia,  Trinidad and Tobago, Kenya, Namibia, India, Jamaica, Papua New Guinea, and members of the International Youth Taskforce from all five regions of the Commonwealth.

Prince Harry asked each one of them how long have they been a part of the council, whether they enjoy their role, and what they hoped to get out of the Commonwealth forums this week.

Prince Harry asked: “Do you feel like people are listening to your generation?”.

After shaking hands, the group moved to a roundtable meeting led by Kishva Ambigapathy, Commonwealth Youth Council chairman, and spent half an hour there discussing with the delegates.

“I wanted to make sure youth and young people are a priority at this meeting.,” Mrs. May told them. “You are the future of the Commonwealth and it’s meant that we listen to you, we hear your ideas.

“You have already shaped the agenda with the issues you want to be discussed, whether that’s youth unemployment or the environment.”

Prince Harry told the group that their generation had “inspired” him, after having seen all the hard work and passion they put during their travels throughout the Commonwealth, adding his saw his role as to “support them, listen to them and make sure they are heard”.

Pleasure to meet and dialogue with British PM Theresa May and HRH Prince Harry. I introduced the #IAmAble campaign to both leaders and encouraged them to support and promote to their fellow Commonwealth leaders. #StillPushing pic.twitter.com/R6UhjjqHQo

The Commonwealth Youth Forum (CYF) is intended as an “opportunity for the young people of the Commonwealth to build cross-cultural connections and networks, debate the challenges facing its young people, and agree on youth-led initiatives to influence decision-makers and ensure young people have a voice in its future”.

The 2018 Youth Forum’s theme is “Powering Our Common Future”, with an agenda set by young representatives.

The Commonwealth has 53 member countries that when combined, have a population of more than 2 billion, 60% of which are under the age of 30.

SEE ALSO: First UK Celebrity Guest To The Royal Wedding Has Been Revealed