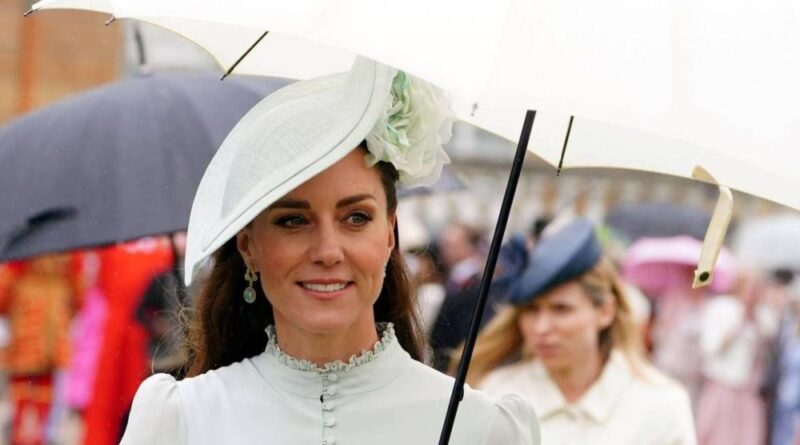 Once again, Prince William and Kate are stepping in for Queen Elizabeth for a royal garden party. It marks the third garden party of the season at Buckingham Palace.

The garden parties are a way for the monarch to celebrate and reward those who have distinguished themselves in public service.

Today, Duchess Kate looked elegant in a mint green dress by her private dressmaker. She completed the look with a hat that featured a large matching pale green flower.

Alongside Kate, was her husband Prince William who wore a top hat and tails, traditional for a garden party.

Despite the weather, both William and Kate were in high spirits and could be seen beaming as they spoke with guests as the rain fall.

The Cambridges were joined by Prince Edward and Sophie, Countess of Wessex as well as Princess Beatrice.

The Palace announced that the Queen won’t attend the royal garden party season, due to mobility issues, and be represented by other members of her family.

Earlier this month was announced that the Queen would not attend the events this year. Buckingham Palace said: “Her Majesty The Queen will be represented by other members of the Royal Family at this year’s garden parties, with details on attendance to be confirmed in due course.”

The Queen, who will celebrate her Platinum Jubilee next week, is increasingly relying on senior royals including Prince Charles, the Duchess of Cornwall and Prince William to stand in her stead at high profile engagements.

Speaking on the absence, royal expert Angela Levin said: ‘It’s a good decision for the Queen not to attend garden parties as there would be too much standing. What a shame though.’

Kate filled in for the Queen to host her second garden party after she attended the one which took place on May 18, along with Prince Edward, Sophie, Countess of Wessex, and Princess Alexandra.