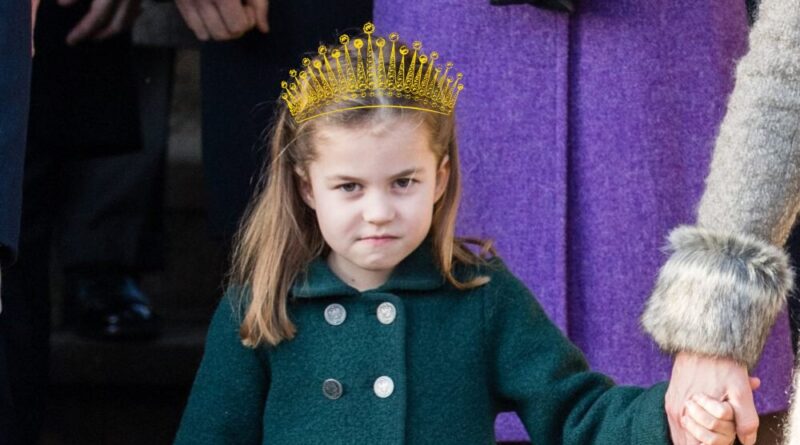 The Cambridges’ daughter Princess Charlotte will most likely inherit a real treasure trove’s worth of jewels, accessories and family heirlooms when she’s older – but there is one item that stands out from the rest!

Her grandmother Diana’s stunning Spencer Tiara, which Princess Diana famously wore on her wedding day in 1981. The tiara was also worn by her older sisters Baroness Jane Fellowes and Lady Sarah McCorquodale at their nuptials in 1978 and in 1980 respectively.

The headpiece is designed in a garland style and features a central heart which is flanked by running scrolls only broken up by star and trumpet-shaped flowers. The tiara is set with circular, rose-cut, cushion and pear-shaped diamonds, mounted in gold.

The tiara was originally inherited by John Spencer, 8th Earl Spencer and father to Princess Diana, in the mid-70s. Recently the tiara has been displayed in the Power & Image: Royal & Aristocratic Tiaras exhibition in London by Sotheby’s auction house.

According to the auction house’s statements in their catalogue, the next royal set to inherit the tiara is none other than Princess Charlotte.

“Having been worn by Princess Diana at her wedding, the Spencer Tiara is one of the most famous diadems in modern history. The tiara is reported to have been created originally in 1767 for Viscountess Montagu and remodelled by Garrard in the 1930s: the central motif was purportedly gifted by Lady Sarah Spencer to ViscountessAlthorp, the grandmother of Princess Diana, in 1919, after which further motifs were added, resulting in the design we see today” reads their catalogue note.

“In the mid-1970s, John Spencer, the 8th Earl Spencer, inherited the tiara. It was subsequently worn by all three of his daughters at their wedding: Lady Jane in 1978; Lady Sarah in 1980; and finally Lady Diana the following year, in 1981. The tiara was most recently worn by Celia McCorquodale – niece of the 10th Earl Spencer Charles – at her wedding in the Spring of 2018. The Spencer Tiara is now set to be inherited by Princess Charlotte.”++

While Sotheby’s states that Charlotte will inherit the tiara, the headpiece is still in the possession of Princess Diana’s brother the 9th Earl Spencer, Charles.

Charles lives at the Spencer family home Althorp House in Northamptonshire and has five daughters from three marriages.

ThePower & Image: Royal & Aristocratic Tiaras exhibition features over 40 British and European tiaras which have been handed down through royal families all over the continent for generations and are seldom loaned for public display. The exhibition runs from 28 May to 15 June at Sotheby’s London base on New Bond Street.