Prince William and Kate must be over the moon over the news that one of their friends has welcomed their third baby.

The royal couple are celebrating the birth of Bear Maclean and his wife Daisy Dickson son, Arlo Finch Bear.

An announcement in The Times confirmed the arrival of the boy, where it was revealed that baby Arlo was born on 6 May. This boy will certainly be a great companion for William and Kate’s third child, Prince Louis, aged 2 years. Baby Arlo also  shares a birthday with Harry and Meghan’s son, Archie Harrison.

Back in 2015, Prince William attended Bead and Daisy’s wedding with sister-in-law Pippa Middleton. Wife Kate was due to join Prince William at All Saints Church in Thurlestone, South Devon. However, she was forced to cancel at the last-minute.

The reason why the Duchess didn’t attend wasn’t revealed, but that the time a source shared: “The names William and Catherine Wales were written on the plan, which appeared on an antique-looking mirror. They were due to sit at the top table. Kate had been expected to attend.”

This happy news comes only a week after it was announced that one of Kate’s best friend Emilia Jardine-Paterson has welcomed her third child with husband David.

On 20 March, Emilia and her husband David welcomed a daughter, Lucia Beatrice India. The couple is already parents to two sons Leo and Alexander. They also announced the baby news in the birth announcements section of The Times newspaper.

Emilia is one of Kate’s oldest friends, having met at Marlborough College. Emilia took Kate off to Ibiza when Kate and William went through their brief split in 2007. She is also one of Prince George’s godparents, with Kate and William choosing six in total.

READ NEXT: The One Trait Queen Elizabeth, Kate And Charlotte Share

Prince Charles Says He Is Dying To Hug His Grandchildren 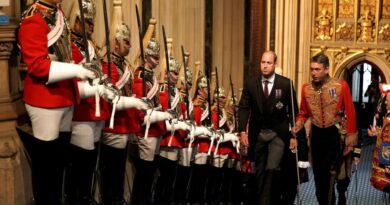 How Prince William Made Royal History With Latest Outing