In his most recent engagement Prince William, the Duke of Cambridge, honoured his late mother Princess Diana’s legacy as he went on a video conference with young people who have experienced online bullying during the global health crisis.

It came quite as a surprise for the teenage ambassadors from The Diana Award to see the royal join their video call, as his appearance was not planned. The Duke dropped in just to show his admiration for what the group has been doing for Anti-Bullying Week.

This charity was created back in 1999, as part of Britain’s official response to Diana’s death two years earlier, and since then has trained more than 35,000 young people as anti-bullying ambassadors working to help victims in schools and communities.

Despite schools being closed for most of the year due to the global pandemic, the charity’s anti-bullying ambassadors say that the abuse has only jumped from real life online. Most children spent the huge part of the year in lockdown in their homes, however, The Diana Award has reported that 46% of the young people they have surveyed have been bullied in some for in the past 12 months.

During the video call, Prince William listened to four youngsters as they shared their experiences of bullying and how they had decided to help others after overcoming it.

Prince William, clearly saddened by this, said: “It’s just horrible and it’s very moving to hear you guys talk about how you want to help others and make sure that doesn’t happen to anyone else.

“That is the most important thing, that you realise this isn’t going to beat you and you want to make sure that others are not going to go through the same torment that you guys have gone through.

“But I’m just so sorry that you’ve experienced these circumstances and these bullies. It’s heartbreaking to hear how much of an impact it’s had on your schooling, your life, and things like that.”

He told them: “Clearly, you guys have all taken this on and beaten it, which is fantastic. Because it can – and, sadly it does – get on top of too many people and some of them can’t come through it.”

The four children that had the chance to talk to the royal were Rose Agnew, 14, from Warwick, Jude Bedford, 16, from Cambridge, Paige Keen, 14, from Norwich, and Isabel Broderick, 15, from the West Midlands.

Rose, who has been a victim of racial bullying, told the Duke the reason why she decided to become an ambassador: “I joined The Diana Award and applied because I know what it’s like to be bullied and that’s a feeling that I want to try and prevent as many people from having as possible.

“When people hate you for a factor that you can’t control and that you can’t change, it just makes you feel so powerless. Obviously, there is nothing I can do to change my skin colour. And knowing that there are people that from the minute I was born essentially hated me just for that reason, definitely when I was younger, I found that really hard to deal with.”

She added: “I think there should be anti-bullying ambassadors in every school because if I had had in Year 8 a girl who knows what I had been through and could have offered me advice and could have made me feel that I wasn’t alone if I could have had that peer-to-peer mentoring that now we can offer, my life would have been so so different.

On the brighter side, one of the sweetest moments was at the beginning of the call, when Rose exclaimed in delight: “No way, no way,” as the Duke of Cambridge joined the call to surprise them.

“Well at least one of you recognised me. The other three are not quite sure…” William said, laughing.

Tessy Ojo, chief executive of The Diana Award, said: “Young people have faced monumental changes this year. We know from our research that mental health and wellbeing is the biggest concern with many feeling isolated from their friends.

“Paige, Rose, Jude and Isabel are passionate about tackling bullying and have continued to overcome barriers during lockdown to support their peers.

“We can’t be together in person for Anti-Bullying Week this year, but this surprise video meeting with the Duke of Cambridge has further motivated these young Anti-Bullying ambassadors to continue with their work standing up to all forms of bullying.”

READ NEXT: New Photo Of The Queen And Prince Philip Reveals A Sweet Gift From George, Charlotte And Louis 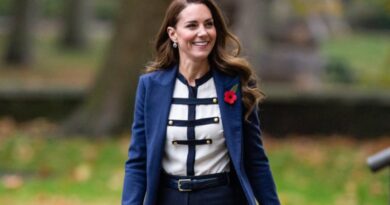