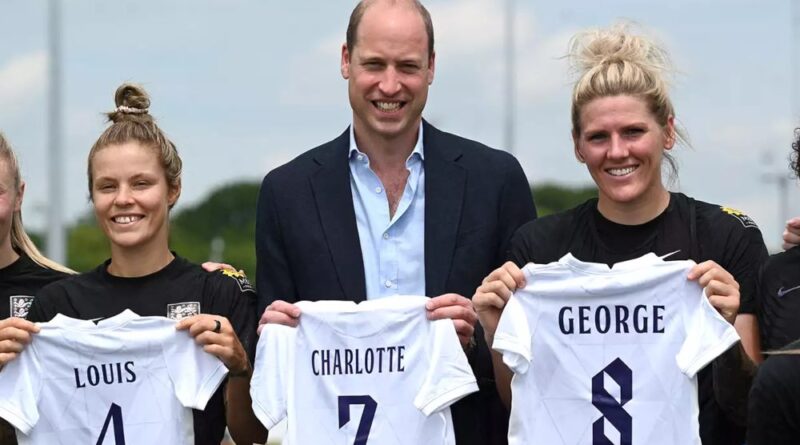 Prince William has spent a fun afternoon with the England women’s soccer squad.

The Duke of Cambridge was back with the Lionesses this Wednesday, when he visited during their training for the upcoming UEFA Women’s Euro 2022, starting July 6 and England will be acting as host.

⚽️ Wishing the very best of luck to the @Lionesses ahead of this summer’s UEFA Women’s Euro 2022.

A major tournament on home soil is an exciting prospect and it’s clear the players are looking forward to the opportunity to show what they can do. pic.twitter.com/RzoZ4BYvMk

The prince regularly visits with the team, fulfilling his role as president of the Football Association, the governing body of the sport in England. One of his more memorable visits was 7 years ago when he joined them for a team photo in the locker room.

William joined the Lionesses at St. George’s Park in Burton upon Trent, some three hours northwest of London, seemingly in his element chatting to players and coaches.

The Duke toured the training facilities and experienced an athlete’s diet when he joined the players, coaches and staff for lunch.

After lunch William wasn’t made to return home empty-handed, the squad surprised the Prince with gifts for his three young royals – jerseys for Prince George, Princess Charlotte and Prince Louis with their names across the back and the number matching their ages, 8, 7 and 4 respectively.

Prince William joined senior members of the royal family at the annual Order of the Garter service at Windsor Castle on Monday, or Garter Day, as part of another busy week. On a more somber note, the Duke and Duchess of Cambridge will be headed to the memorial of the Grenfell Tower tragedy, marking the fifth anniversary of the fire which cost 72 people their lives.