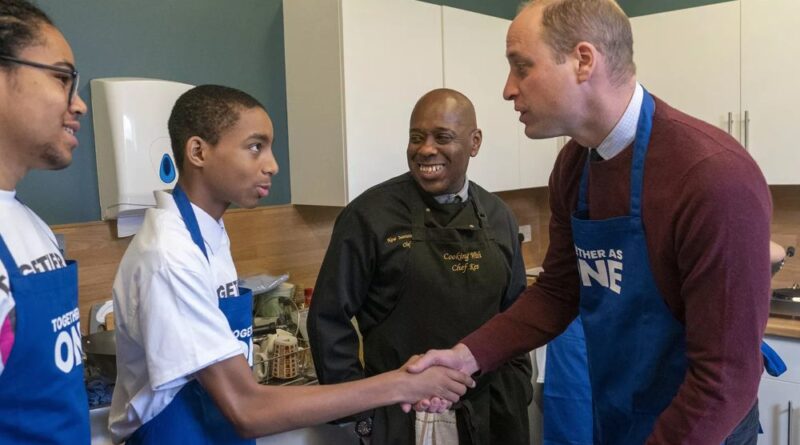 Prince William steps out for a solo outing on Tuesday – visiting the ‘Together as One’ charity in Slough!

The Together as One charity is dedicated to creating positive social change in collaboration with young people, it was created in the late 1990s as a direct response to incidents of gang violence between young people from Asian backgrounds.

The Prince of Wales enjoyed a cooking lesson with the organization, chatting with the youngsters and sporting a blue apron, while he helped prepare a chicken teriyaki dish.

“I do a bit of cooking, not much though,” says the Prince, before quickly giving praise to his wife, saying: “Catherine’s very good though.”

The Prince of Wales is at Together as One in Slough, Berks., which is celebrating its 25th birthday. It was founded in response to incidents of gang violence between young people from Asian backgrounds in Slough in the late 1990s pic.twitter.com/zrIiPwKrv3

However, the royal does have one specialty on the ready: “I do a mean steak,” he says, although even that has its drawbacks: “My sauces come out quite dry or lumpy — I’ve got to work on those!”

During his visit William learned about the work that the charity undertakes in Slough, meeting with current staff – former volunteers – who help to deliver the charity’s work and help young people challenge prejudice, contribute to mental health and resolve conflict.

This outing is during quite a turbulent time for the royals, facing allegations from the Duke of Sussex’s memoir, where he even alleges that Prince William physically attacked him in 2019.

The royals have ignored reporters’ questions about the book, remaining tight-lipped, while Prince Harry has since expressed hopes for reconciliation with the royal family.

Prince William and King Charles are “upset and sad” but “quite resilient. Responding publicly would not be the smart thing to do,” royal insiders say.

Before leaving, William got a chance to speak with a group of volunteers who have led projects in their respective communities, helping provide clothing and food for people experiencing homelessness, training their peers in schools to resolve conflicts without the use of violence and campaigning against violence in general against women and girls.