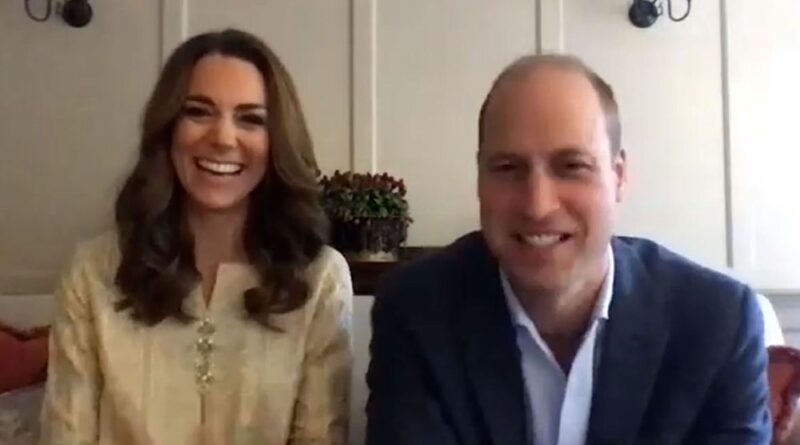 “Catherine is very good, I’m really bad,” the Prince said of his and his wife’s artistic skills. Prince William and Kate Middleton’s most recent engagement found them taking part in a game of Pictionary. The two royals reconnected with schoolgirls they met in Pakistan last year through video call. They spoke to the girls and their teachers exactly one year after their historic visit to the country.

During the video call with the Islamabad Model College for Girls, Kate gave tons of praise to the teachers for “doing an amazing job” during the global health crisis. “You are a real lifeline for families out there,” she added.

The two royals took part in a game of Pictionary, answering questions and trying to guess correctly. They got off to a slow start, with Kate thinking a drawing was a wedding. However she quickly got the hang of it and guessed correctly to the first question when she said birthday. For the engagement Kate wore a traditional Pakistani-styled jacket as a way of showing respect.

Prince William also had some difficulties, squinting at the screen to get a better look at the drawings, as well as complementing the girls on their skills, with one asking the Duke and Duchess if they enjoyed drawing.

“Yes, definitely, we both like a little bit of drawing,” William said. “Catherine is very good, I’m really bad.”

Kate jumped in the conversation, touching her husband’s arm and saying: “You don’t practice enough!”

William guessed correctly when he was given a description of a game of cricket that they took part in, when the two were on their week-long visit to the country, when they played the national game with some young people.

During their visit to the country, the couple’s made stops at government-run schools in Islamabad, meeting children from the kindergarten level to the sixth grade, and talked with them about how the children are benefitting from the Teach For Pakistan program, which is modeled after the UK’s successful ‘Teach First’ scheme.

During the video call, the royals also spoke with a special group at SOS Children’s Village in Lahore; which is currently providing home and family structures to over 150 young girls and boys.

During their call, the royals learned how the village has helped to teach the children how to combat the spread of the virus through sessions led by doctors and medical staff. They also touched upon the support given for the mental health of the staff and children throughout the pandemic.

Some of the children from the village showed off some of their artwork, such as drawings and friendship bracelets they had created about their memories of the visit last year.

The SOS Children’s Village clearly made an impact on Prince William and Kate Middleton, as the two returned after their initial visit at the start of last years tour.

On their second visit, they took part in cricket and arts and crafts, as well as a birthday party for one of the children supported by the village. After those two experiences, Kate described her visit to the country as “fantastic” and “really special”.

One of the highlights of the tour was one evening went they went out for an engagement; with Kate looking absolutely stunning in a sparkling deep emerald column gown by Jenny Packham (matching the national color of the country) and earrings by Onitaa, sourced from Pakistan. William cut a dashing figure in a traditional green sherwani — a long coat-like garment.

The designer of William’s sherwani Nauman Arfeen later told PEOPLE that it didn’t “seem like he was wearing something for the first time. He knows how to handle it and carry it. That was simply superb.”

On Friday, on every Kensington Palace social media account there was a tease of a new video showing off a new version of the couple’s stunning black-and-white arrival in Islamabad shared.

READ NEXT: How Do George, Charlotte And Louis Call The Duchess Of Cornwall?

William And Kate Will Join Charles And Camilla On Red Carpet