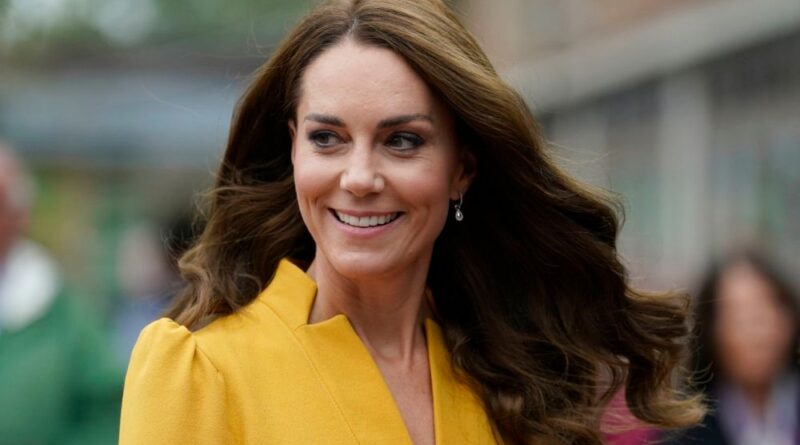 Kate, the Princess of Wales made a surprise visit to the Royal Surrey County Hospital in Gilford, meeting with the staff that provide support to pregnant women, as well as talking with new mothers affected by mental health struggles.

Kate met with new mom Szilvia Novak and her daughter Bianca, who was born six weeks premature. A photograph of the meeting capture the sweet moment in which Kate is chatting with Ms. Novak while tenderly holding tiny Bianca in her arms. It came after the new mom, who is originally from Budapest in Hungary, asked if the royal would like to hold the baby while the pair talked in the hospital’s Special Baby Care Unit.

Kate replied: “Am I allowed to?” before a member of the staff helped Ms. Novak hand the baby to Kate. As she gently held the baby, Kate said: “She’s very sweet.” After their short but sweet meeting, Kate returned the baby to her mother and continued with the tour of the hospital.

Afterward, Ms. Novak said: “I asked her if she wanted to hold her and she opted for it. I can’t blame her. (Bianca) is cute.

“(The princess) was lovely to speak to. I was really impressed. You don’t feel like you have classes between you. It’s really nice.”

The SCBU is only one of the few units in the country that provides new mothers the ability to remain close to their babies at all times through round-the-clock cot side sleeping facilities.

Staff also encourage parents to take part in the care of their premature babies as much as they can, in things like bathing, feeding and nappy changing.

Besides her sweet meeting with Ms. Novak and her baby, Kate also met with the staff of the Jasmine team, which helps women affected by mental health illnesses during pregnancy and the initial postnatal period.

For this surprise visit, the Princess wore a belted pleated Karen Millen dress in ochre, which costs around £175 and to finish off the look she wore the mandatory face mask when visiting any hospitals or healthcare facilities.

This maternity unit delivers and cares for around 3,000 babies a year, and in 2022 it received a Unicef baby-friendly initiative gold award for its outstanding work on infant-feeding and parent-child relationships.

This marked the first big solo engagement for Kate since she was made Princess of Wales by King Charles, following the death of Queen Elizabeth II.

Early care has always been a major focus point for the Princess, with this visit being just one of many others that she and her husband Prince William have done this week to showcase their continuing key interests. Prince William has visited St George’s Park, the national football center of England, as he is president of the FA.

Today’s surprise visit for Kate comes one week after she and William visited Wales for the first time since being given the titles of Prince and Princess of Wales by King Charles. Their new titles were officially confirmed during Charles’ first televised speech to the nation.

The couple promised to visit Wales at the earliest opportunity following the death of the Queen, and return hoping to begin “deepening the trust and respect” they have with the people of the country.

While in Wales they visited a church in Swansea, where they met with volunteers who work in the church’s food bank, as well as the Swansea Baby Basic initiative, which works to distribute essential items such as toiletries and clothing to vulnerable mothers.

Back in 2020 Kate worked with baby banks and helped bring together 19 British brands and retailers to donate over 10,000 new items to more than 40 such banks worldwide.

Last week Kate also met with Royal Navy sailors at Windsor Castle in another surprise engagement. The royal met with some of the company of the HMS Glasgow, of which she is a sponsor, and gained a better understanding of their roles on board.

READ NEXT: William Remembers The Late Queen In First Speech As Prince Of Wales