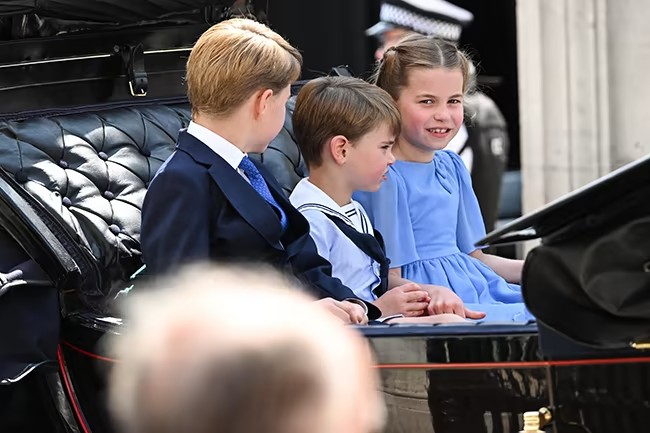 On Thursday, at Trooping the Colour, the annual public commemoration of Queen Elizabeth’s birthday, Kate Middleton and Prince William’s children rode in a carriage for the first time.

Along with their mother Kate and Camilla, Duchess of Cornwall, the siblings rode in the first carriage of the parade.

Kate wore a white dress by Alexander McQueen, who also designed her wedding gown, and a white and blue Philip Treacy hat, while her three children wore blue. In a suit, white collared shirt, and blue tie, George, 8, looked like a grown-up. Charlotte, who is seven years old, was dressed in a blue dress with sheer sleeves. Louis, who is four years old, looked charming in a sailor-inspired white and blue outfit.

Charlotte and Louis waved joyfully to the throngs of well-wishers lining the streets as the carriage made its way down the Mall.

In 1987, two weeks before his fifth birthday, Prince William made his carriage debut. As he took in the celebrations, he wore a pale blue coat. He sat opposite from his mother, Princess Diana, and great-grandmother, the Queen Mother, before relocating to a seat between the royal women (perhaps for a better front-facing perspective!).

When Prince Harry was four years old, he went on his first Trooping the Colour carriage journey with his brother, mother, and great-grandmother.

While George, 8, Charlotte, 7, and Louis, 4, will be participating in the carriage procession for the first time, the young royals are already Trooping the Colour veterans, having all previously stood on the Buckingham Palace balcony for the Royal Air Force flypast.

For years, Prince George and Princess Charlotte have flaunted their royal waves, and Prince Louis made his first balcony appearance in 2019. (before Trooping the Colour was massively scaled down in 2020 and 2021 due to the COVID-19 pandemic). As she eagerly waved at the audience gathered outside the palace and pointed to the Royal Air Force jets overhead, Louis had everyone — including his parents! — giggling.

Louis had everyone — including his parents! — giggling as she enthusiastically waved at the crowd gathered outside the palace and pointed to the Royal Air Force jets overhead.

Prince George and Princess Charlotte are now old enough to join their family on important events. For the first time, the siblings took part in the royal family’s annual walk to church services in the English countryside on Christmas Day in December 2019.

In March, the two eldest Cambridge kids also joined their parents at a service of thanksgiving honoring their great-grandfather Prince Philip, who died in April 2021 at age 99. 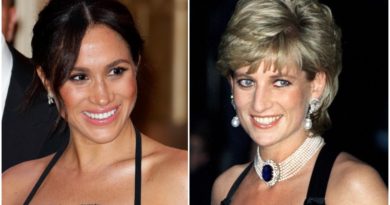 The Surprising Connection Between Meghan And Princess Diana