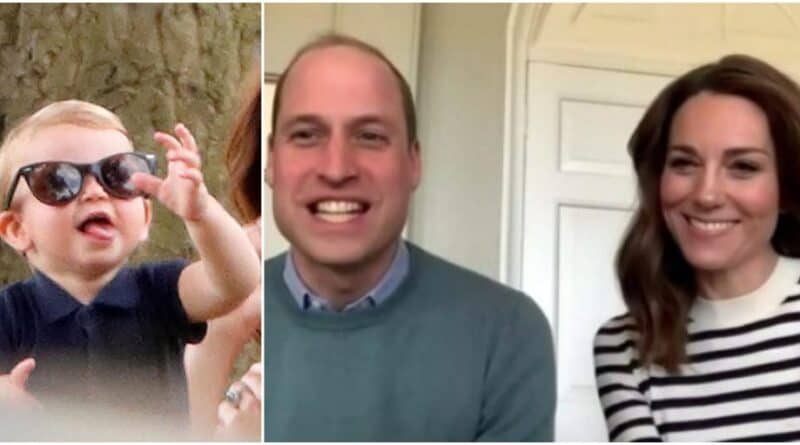 Prince Louis hasn’t even turned two yet and has already got a hang of Zoom calls.

Kate Middleton and Prince William have been working from home through video conferencing, but have run in into an unsuspected problem.

With the UK and most of the world in lockdown, everyone has started to adapt to working from home, mostly with video calls. And so have Kate Middleton and Prince William as well, keeping in touch with all the charities and organizations that the support. They have, however, run into an unexpected problem. Their youngest child, Prince Louis, who will be turning two next weeks, can’t resist inadvertently cutting off his parents’ calls!

The two royals also revealed that they have been keeping in touch with the rest of the family as well, talking with William’s father, Prince Charles, who recently overcame the virus, and Kate’s parents, Carole and Michael Middleton.

“We’ve been talking to all the family online. And it’s been a really good way of keeping in touch and seeing each other,” William said. “As you can imagine, the younger generation is a little bit more tech-savvy, but only just, I think we’re getting there now. The family are getting a little bit more used to be able to contact each other and pressing the right buttons and not dropping the computer halfway through.”

Kate, 38, added, “It’s so true. And I think your father and my parents and our families… have really loved keeping in touch with the children because it’s really hard. It gets a bit hectic, I am not going to lie, with a 2-year-old.”

Besides working from home, the Duke and Duchess of Cambridge have also started homeschooling and helping their three children, Prince George, Princess Charlotte and Prince Louis understand why they are in isolation. At the moment the family of five is self-isolating at their country home, Anmer Hall, in Norfolk, located 110 miles north of London.

“It’s been ups and downs, like a lot of families self-isolating. George is much older than Louis is and things, but they are aware, I’m always surprised,” Kate said. “And although you don’t want to scare them and make it too overwhelming, I think it is appropriate to acknowledge it in the simple ways and age-appropriate ways.”

READ NEXT: The Newest Hobby Prince Louis Has Been Obsessed With Revealed

It seems that the royal couple has adapted to the whole homeschooling thing quite nicely, with William describing it as “fun”. Kate even revealed a new trick she tried during the Easter break.

“Don’t tell the children, we’ve actually kept it going through the holidays. I feel very mean!” she began. “The children have got such stamina, I don’t know-how. Honestly, you get to the end of the day and you write down the list of all the things that you’ve done on that day. So, you pitch a tent, take the tent down again, cook, bake. You get to the end of the day — they have had a lovely time — but it is amazing how much you can cram into one day that’s for sure.”

The entire royal family has been trying to carry on with their daily lives somewhat, keeping in mind all the restrictions of social distancing. Due to it, last week the Duke and Duchess conducted their first-ever full royal engagement via video call amid the coronavirus pandemic, chatting with a school in northern England where the kids of essential workers — such as healthcare staff and emergency services members — are being cared for and taught.

William and Kate “have been in regular contact with organisations and patronages to understand the issues they are facing during this difficult time,” according to their office.

READ NEXT: William And Kate Reveal A Secret They Haven’t Told George And Charlotte