Kensington Palace has revealed that Charlotte will start at Thomas’ Battersea, the same school as her brother George. A statement read: “Princess Charlotte will join Prince George at Thomas’s Battersea from September 2019 this year.

” The Headmaster at Thomas’s Battersea, Simon O’Malley, said: “We are delighted that The Duke and Duchess of Cambridge have decided that Princess Charlotte will join her elder brother, Prince George, at Thomas’s Battersea. We greatly look forward to welcoming her and all of our new pupils to the school in September.”The Princess, who turned four this month, will also join cousin Maud Windsor, who is in the same year as George.

It’s likely that the Duke and Duchess of Cambridge will release at least one official portrait of their daughter on her first day at ‘big school’. George started reception in 2017 and to mark the big occasion, they released an adorable portrait of him with dad William, posing outside their home before they set off for school. He was dressed in his navy uniform and was smiling from ear to ear. Even the press was invited to cover the event.

George looked a little timid as he arrived at Thomas’s Battersea, holding his dad’s hand and shying away from the cameras. Mum Kate wasn’t able to drop off her son because she was suffering from severe morning sickness. She was pregnant with Prince Louis at the time.

Charlotte will have her big brother around to show her the ropes. In reception, she is expected to dabble in French, Computing, Art, Music, Drama and Ballet as well as Maths, English and PE. The £6,110-a-term private school is for children between the ages of four and 13. It has a strong focus on the arts, sports and outdoor activities in addition to academics.

READ NEXT: Why Kate Didn’t Win An Award At The RHS Chelsea Flower Show? 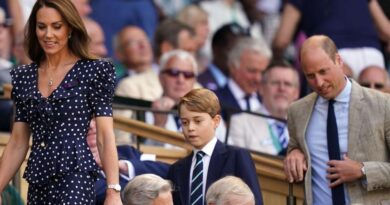